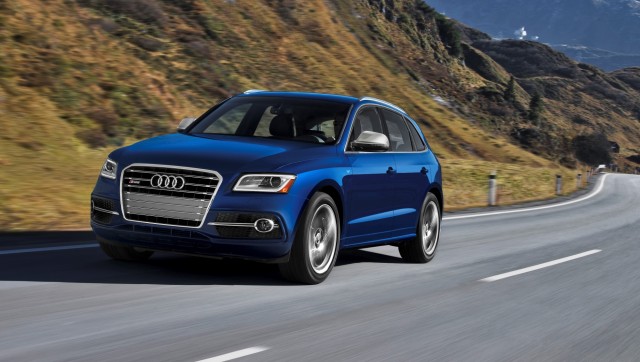 The SQ5 is the first "S"-designated Audi crossover. To earn the alpha tag, it's plumped up with more horsepower than the current supercharged V-6 can muster. Output from the same drivetrain has been massaged up from 333 hp, and torque is 347 pound-feet.

Joining the Q5 lineup along with a new TDI turbodiesel, the SQ5 gets the usual standard eight-speed automatic and quattro all-wheel drive found across the Audi Q5 lineup. Above and apart from those other models, the SQ5 adds 20-inch wheels as standard equipment, with 21-inchers an option, and also gets a dark-grey grille, new front and rear fascias, aluminum trim, and inside, a flat-bottom steering wheel and gray-faced gauges.

In the cockpit, the SQ5 has leather and Alcantara seats, with ventilated leather seats an option.

Tech features include options for blind-spot monitors and adaptive cruise control, as well as Bang & Olufsen sound and Audi Connect, with its 3G in-car connectivity and lush Google Earth maps.

We'll bring you more on the SQ5 later this year. For more on the current crossover, read our 2013 Audi Q5 review.