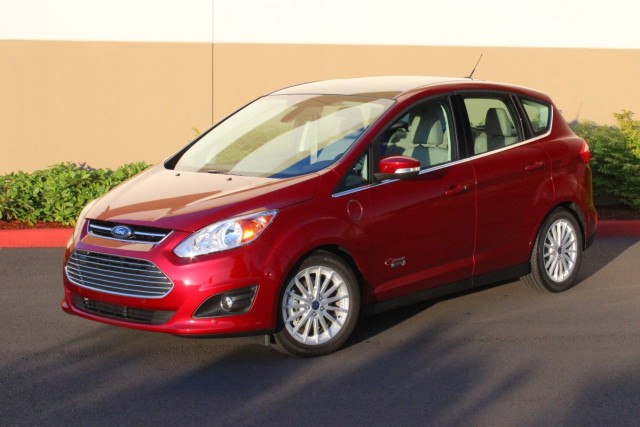 The 2013 Ford C-Max Energi is a plug-in hybrid. But if you keep your trip lengths relatively short, and get in the habit of plugging in at home and perhaps at work, it does a really good job pretending it's an all-electric car.

Selecting the Energi's 'EV Now' mode, we managed to do a 20-mile round-trip errand, out to the suburbs and back, with part of it at freeway speeds—and even running the A/C for some time—on plug-in battery power alone.

While the all-electric capability in the Toyota Prius Plug-In feels a bit like a novelty—the gasoline engine there still kicks on if you accelerate too rapidly, or get above 51 mph—the C-Max Energi stays electric and doesn't feel emasculated or compromised in that mode. It'll go all the way up to 85 mph with only the electric motor system if you want it.

A joy to drive electric—for 21 miles

And although the C Max isn't at its quickest in its EV mode, it's a joy to drive as such—nearly silent yet responsive, with almost no motor whine. Get to the point where the gasoline engine does start up, and the C-Max feels far smoother and perkier than the Prius Plug-In or Prius V—with far less engine drone as well.

We also greatly appreciate the management tools that Ford has placed in this plug-in hybrid. Hit an 'EV Now' button, and you can make sure that the gasoline engine doesn't come on at all; or hit the 'EV Later' button and it'll save your battery power, moving over to hybrid mode, with a combination of the gasoline engine and motor system under most kinds of driving. Knowing what you know about speeds along your route, you can save the electric mode for the slow crawl in gridlock, and go with gasoline on the high-speed portion.

The C-Max Energi charges back up in about seven hours on a typical 110V household outlet, or less than two and a half hours on 220V; so it's entirely possible to charge back up for another 21 miles by the time you're done at the office.

Ride quality is firm but just agreeable enough, active noise cancellation and lots of sound-insulation measures help keep on-the-road refinement at its best, and the steering is very precise and well-weighted—nearly as good as what you'll find in the Ford Focus. The C-Max is, after all, a tall wagon based on Focus underpinnings.

Although the C-Max is a few hundred pounds heavier than the Prius, especially here in Energi guise its numbers are a lot stouter: 141-horsepower, 2.0-liter four-cylinder engine pairs with an 88-kW electric motor system to make a combined 195 horsepower—54 hp more than the Prius's combined output.

A bigger battery and a big packaging tradeoff

The key to the C-Max's very useful all-electric driving range is its far larger 7.6-kWh battery—versus 1.4-kWh in the standard C-Max hybrid—good for 21 miles of range. The Prius Plug-In only gets a 4.4-kWh battery, and it's good for an EPA-rated 11 miles, but that's within its tighter operating range.

But that battery comes with a very significant tradeoff, which we were reminded of several times during the week we took the C-Max through our daily routine. The big pack is the size of a large suitcase (or a small chest, almost) and basically loaded right into the cargo area—taking up most of the prime space that might be used for a load of groceries, and making the cargo floor, when you flip forward the rear seats, a cobbled, multi-level affair. Transporting a large bag of garden mulch with three people aboard required, for instance, drooping the bag around the edge of the non-folded rear seatback.

Otherwise, the C-Max Energi is pretty impressive for hauling four adults around. The back seats are a bit on the low side, leaving anyone adult-sized in a knees-up position; but there's plenty of legroom and headroom.

Plugging in helps, although it doesn't come free

How efficient is the C-Max Energi? I topped off our test vehicle carefully (difficult given its capless system) before my week of driving. We then drove 440.1 miles, of which the trip computer said 163.3 miles were in EV mode (that includes true plug-in miles plus mileage in hybrid mode when the gasoline engine is off). At the end of that period, it summed that I'd used 10.23 gallons of gas and 15.8 kWh of electricity from plugging in. In all, that adds up to 41.1 MPGe, it said.

That includes about 360 miles of highway driving (nearly all in hybrid mode) as well as about 80 miles around town (nearly from plug-in battery power). 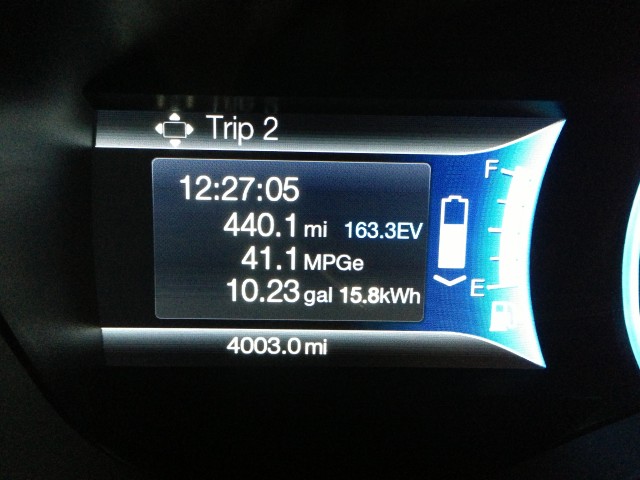 Here's where it gets especially confusing: In the C-Max Energi's set of highly configurable and customizable screens, it displays its overall efficiency based on MPGe (in terms of miles per the energy content in a gallon of gasoline). And in general, those numbers soar (misleadingly high, it seems) whenever the electric motor system is on then plunge when the gasoline engine fires up.

Using that 10.23 gallons (or the 10.27 gallons we recorded on a careful refill), our consumption figures out to a real, non-equivalent 43 miles per gallon—when you don't figure in the energy from plugging in. So plugging in several times (at the expense of about $2 of electricity, tops) probably netted us about five more miles per gallon, if you go by the 36-38 mpg that we've seen in the C-Max Hybrid over some other comparable real-world drives.

Since I estimated that I'd used the capacity of the battery pack about three full times through, that emphasizes a point that—for longevity, perhaps—the system isn't quite using the full capacity of the 7.6-kWh battery.

In any case, Ford says that C-Max buyers are plugging in more often—and using their all-electric mode more often than anticipated. They'll certainly save money, too, by plugging in, but it's nothing that will make the Energi's $33,745 base price feel like a bargain.

Better than Prius, but numbers not as favorable

Altogether, it's really tough to find fault in anything about how the 2013 Ford C-Max drives—especially if, as we did, you use the Toyota Prius as a benchmark.

Is the Ford C-Max Energi a lot more fun to drive than the Prius or Prius V? Absolutely. Compared to the Prius, which tends to highly discourage you from moving along briskly, the C-Max almost invites it, with its responsive driving character.

At the same time, that may be part of Ford's problem in not seeing real-world mileage that's quite as high as claimed—at least not yet. As we see more owners understanding the complex set of displays and how their cars work, we think many more buyers will be happy with what the Energi models do. Maybe not entirely happy with the money or fuel they've saved, but happy with the vehicle.