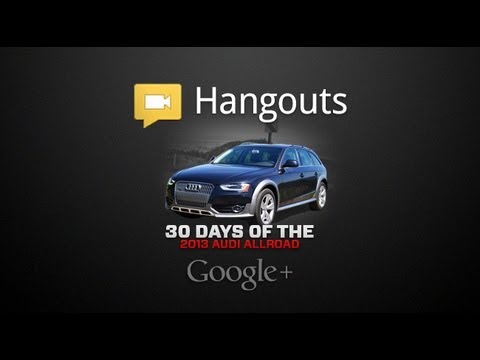 As we hit the halfway point in our month with the 2013 Audi Allroad, we thought it would be a good time to grab some of our editors together on video for a discussion about our experience so far, and about the Allroad in general.

Editorial director Marty Padgett gave us a breakdown on what the Allroad is, and who it's for. This quickly led to a brief overview of the history of the Allroad nameplate.

A vehicle sporting the Allroad nameplate must have quattro all-wheel drive, and we discussed the system's past, present, and future. The Allroad is also defined by its rugged exterior appearance and extra ground clearance, not to mention its plastic body cladding that reminds Marty of a Timberland hiking boot.

We've been impressed with the Allroad's fuel economy so far, and it's quite photogenic. Unfortunately Audi's MMI infotainment system in the Allroad can be frustrating to use.

So what's left? We still hope to take a road trip in the Allroad this month, and we'll check back in on the fuel economy. There are a few changes in store for the Allroad in 2014 and we'll discuss those as well. People who buy the Allroad might be interested in some accessories, so we'll be taking a glance at those options, and we'll price out a loaded Allroad just to see how much you'll need to dig out of the piggy bank.