Airstream2Go: Rent A Trailer, Get A GMC Yukon Denali Free* 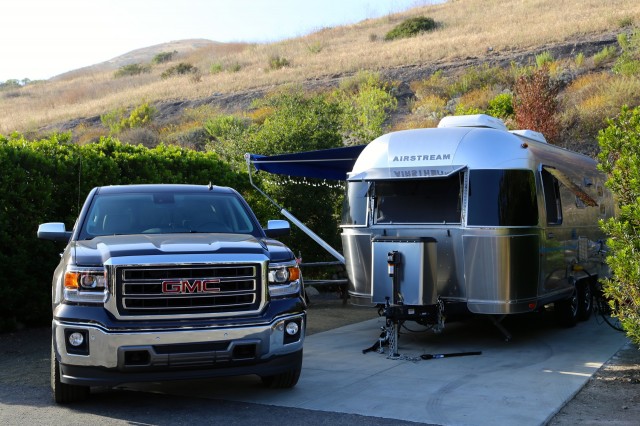 Here at High Gear Media, we're camping people. Clearly. But when GMC invited us to the launch of the 2014 Sierra and promised an actual bed in an actual enclosed structure, we said yes. Actually, first, we cried a little, but don't judge.

In this case, the bed was a lavish one, and it came stocked with Nutella, a hot shower, fluffy towels, a petite kitchen, and a flat-screen TV. All that was bundled into a fully equipped Airstream 23-foot trailer hooked to our Sierra for the weekend "glamping" adventure (yes, it's a word), provided by Airstream2Go, the only factory-licensed renter of the pretty, shiny, riveted trailers in America.

Airstream2Go has a simple story. They want you to come to them when you want to go camping. Don't bring your car, your truck, or anything, except maybe a family, and a credit card. Everything's included with one of their rentals--down to the GMC Yukon Denali that tugs the trailer to your vacation destination. That way, says CEO Dicky Riegel, Airstream2Go can guarantee the tow vehicle's up to speed with the weight and the handling of the trailer.

It's a premium experience, evidenced by the hardware alone. The Airstreams are either 23-foot or 28-foot units, either a single-bed or a two-bed setup complete with a designer interior, and fitted with a full kitchen fueled by electric and propane; air conditioning; a power canopy; the LCD TV, a DVD player, and an iPod-interfaced audio system; camping chairs; and a gas grille. The trailers can also be outfitted with bike racks, and all hookups are completed with a trailer rearview camera, a major aid for the novice trying to park an Airstream.

It's not simply a hand-over service, though. The company also serves as an outfitter for renters that need some guidance for their trip. That includes everything from basic instruction on safe operation of the trailer, to route planning, even to pairing your crew with an expert guide or an iPad stocked with route maps and information.

Airstream2Go can set up a custom itinerary throughout the country, though with pickup locations in the Los Angeles and Las Vegas metro areas, an Airstream vacation's likely to stay out west.

Rates range from a 23-foot trailer for five days for $3850, to two weeks in a custom-planned trip in a 28-foot trailer for $14,420. It's no budget trip, but sleeping under the stars and beneath a feather duvet never has been.

What, you want Amtrak instead? We hear they stop in Delaware now.