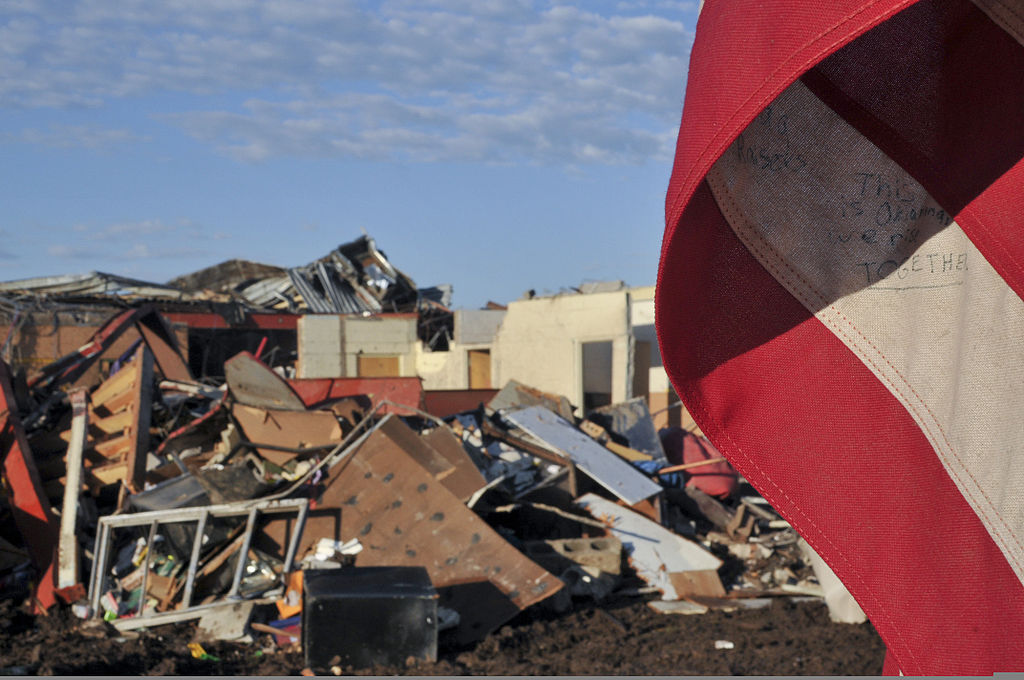 A U.S. flag stands amid the ruins of Briarwood Elementary School in Moore, Oklahoma, May 22, 2013, two days after an EF5 tornado with winds exceeding 200 miles per hour tore through the Oklahoma City suburb (via Wikimedia)

On Monday, May 20, a tornado touched down in the town of Moore, a suburb of Oklahoma City. Tornadoes are a fact of life in the Midwest, but this one was far from ordinary -- a fact proven by the numbers we use to describe it: 200 mph winds, 1.3 miles wide, a path of destruction 17 miles long, 377 injured, 24 dead.

As with many disasters, the auto industry has been quick to lend a hand in the region's recovery. General Motors was the first onboard, but others are doing their part, too. Here's a list of those we know about so far:

CHRYSLER
The Chrysler Foundation has made a $100,000 gift to First Response Team of America. According to its website, First Response works to "fill the gap between the onset of a disaster and the arrival of traditional relief agencies, when too many communities must fend for themselves because the resources necessary for rescue and recovery‚ equipment, tools and personnel‚ are damaged, inaccessible or unavailable." Chrysler's Ram brand has a pre-existing relationship with First Response and has donated three heavy-duty pickups to the organization to facilitate its work.

FORD
Ford and its network of dealers have contributed a whopping $400,000 to relief efforts. In a press release, Ford says that $250,000 of the total has been given to the American Red Cross from the Ford Motor Company Fund. The remaining $150,000 has been given to the United Way by the Oklahoma Ford Dealers. Beyond that, Ford has given a Transit Connect van to the Red Cross to aid in the recovery, and the company is also providing motorists whose vehicles were damaged by the storm a $500 credit toward the purchase of a new Ford car or truck.

HYUNDAI
According to a press release, Hyundai Motor America has made a $200,000 gift to the American Red Cross to support Oklahoma's recovery efforts.

MAZDA
Mazda has made two gifts of $25,000 to the American Red Cross. One came from the automaker itself, while another came from The Mazda Foundation. As with Ford, Mazda is offering those affected by the storm a credit of $500 towards the purchase of a new Mazda. The company is also giving qualified buyers the option to defer the first payment on those vehicles for 90 days.

TOYOTA
Toyota has announced a gift of $250,000 to Oklahoma's recovery efforts. Unlike the other automakers listed above, that sum comes entirely from the for-profit automaker, not from an affiliated nonprofit foundation. What's more, Toyota is encouraging its employees to support the cause by matching all employee gifts.

We'll update this list as other automakers pledge to help Moore and Oklahoma recover.