Connect with our dealer and finance partners through our site and ask for details regarding their at-home car buying services.
OK
HomeNewsTruck 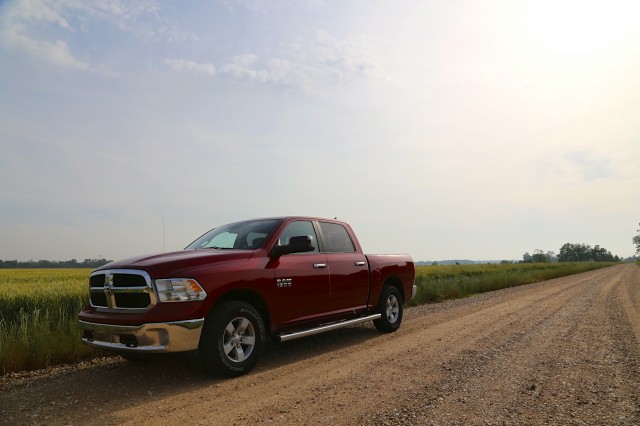 Gas mileage isn't usually the first step in the decision tree when it comes to buying a pickup truck. If gas mileage is a deciding factor, though, it could be the reason the Ram 1500 is chosen over its top rivals.

For the 2013 model year, the Ram's base drivetrain upped the fuel economy ante. The switch from an antiquated V-6 to Chrysler's newer Pentastar 3.6-liter V-6, and the swap from older automatics to the latest ZF eight-speed unit, has netted Ram impressive EPA numbers. At the very top of the lineup, the Ram 1500 V-6 earns EPA ratings as high as 18 miles per gallon city, 25 miles per gallon highway, when outfitted with the HFE model's active air shutters and stop/start technology.

Our Ram isn't an HFE, and since it's a Crew Cab with four-wheel drive, its EPA ratings are somewhat off those high-water marks. Still, at 16 miles per gallon city, 23 miles per gallon highway, or 19 mpg combined, it's rated highly enough for truck buyers to consider swearing off the thirstier 4.7-liter and HEMI 5.7-liter V-8s.

But does the V-6 turn in those numbers in real-world mode? We measured fuel economy over the first two weeks of its stay in the usual way, topping it off carefully and noting mileage to a couple of significant figures (and recording some very low gas prices for regular unleaded--$3.29 a gallon in Alabama). We also tracked it against the truck's fuel-economy and tripometers, to gauge their accuracy.

For our first tank, which consisted of lots of short low-speed runs in town, some loaded down with a full payload, the Ram turned in 16.0 mpg. On tank two, with some city driving included among a long interstate trip at speeds over 70 mph, we hit 18.5 mpg. In all, the Ram averaged 16.9 mpg for its first two weeks in our hands--at the low end of its rated range, but well within the 20-percent factor the EPA suggests is normal for its combined ratings.

Meanwhile, the Ram's gauges gave us some clues about its ongoing usage patterns along the way. During our Atlanta drives, we saw gas mileage dip as low as 12.4 mpg on the multi-screen displays. We watched it rise as high as 19.5 mpg as we used it as a Delta cruiser and as a Delta substitute.

Are those numbers enough to convince us to ditch luxurious eight-cylinder power for good? As we've pointed out in our 2013 Ram 1500 review, the V-6 is probably more than adequate for plenty of truck owners who rarely tow and haul at its maximums. And we've regularly noted fuel economy in the low teens in HEMI-equipped Rams, Jeeps, and Dodges.

At $3.29 a gallon, it's a little less convincing than the $4-a-gallon prices of previous years, but the V-6 checks in about where we'd expect it to at the gas pump so far. Will it do the same as we put it through more towing and off-road driving? We'll let you know next week.


Our 2013 Ram 1500 SLT Crew Cab 4X4 has a busy schedule this month as we put it through towing, hauling, off-roading, and accessorizing, from Georgia to Arkansas and back. Stay tuned for more--follow our Ram 1500 run here, and as always, follow The Car Connection on Facebook, Twitter and Google+.