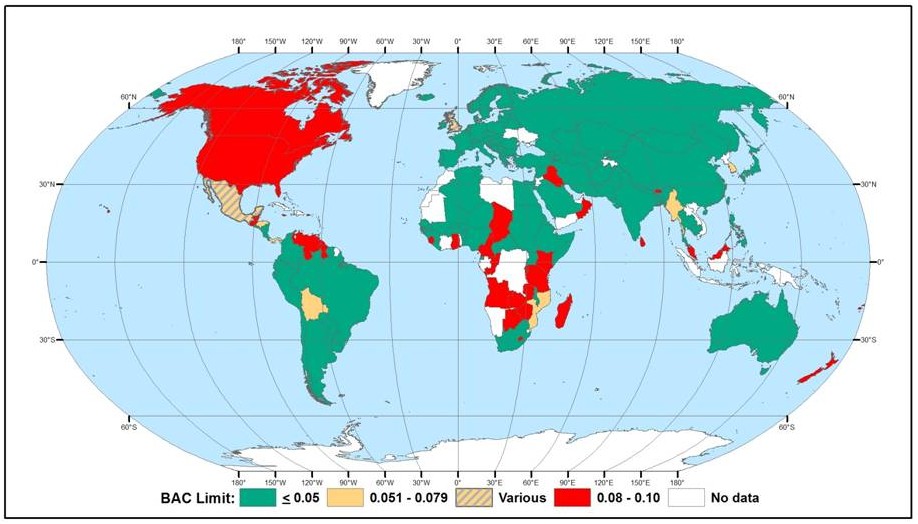 Last week, the National Transportation Safety Board urged states to lower the blood alcohol content limit for motorists from .08 to .05. Doing so, the NTSB argued, would reduce the number of drunk driving incidents and the number of alcohol-related traffic fatalities.

Reducing traffic deaths seems like a laudable goal, but some organizations weren't enthusiastic about the NTSB's proposal. Perhaps its loudest critic was the American Beverage Institute, a trade association (and lobbying group) for restaurants and liquor stores. In a statement, the group's managing director, Sarah Longwell, said quite clearly, "The NTSB’s reasoning is impaired".

Longwell went on to argue that drinkers in the .05 to .08 range aren't a major problem on the roads: "The average BAC level of a drunk driver involved in a fatal accident is a whopping 0.16 percent—twice the current legal limit. In fact, 70 percent of drunk driving deaths involve a driver with a BAC of 0.15 or higher."

The National Restaurant Association was none too pleased with the NTSB's plan, either. (Which isn't surprising, since alcohol sales have a high profit margin and help keep restaurants in the black.) The Association issued its own statement to the Wall Street Journal, which echoed many of ABI's concerns: "We feel measures addressing drunk driving should be focused on repeat, chronic offenders who drink excessively then drive, and not the millions of Americans who enjoy an adult beverage in a responsible manner with their meal".

Even the Governors Highway Safety Association and Mothers Against Drunk Driving were cautious about supporting the NTSB's proposal. In fact, neither offered an endorsement, with both preferring to focus on other initiatives -- like MADD's push to have ignition interlocks installed on new cars.

SO, HOW DO WE CURB DRUNK DRIVING?

The NTSB insists that lowering BAC levels would save around 500 - 800 lives per year. The agency points out that plenty of countries have similar laws in place; in fact, over 100 countries on six continents have set the BAC threshold at .05 or lower.

But the last time America tried to reduce BAC levels, it took nearly 20 years to get every state onboard. It's true that traffic fatalities fell during that time, but the percentage of deaths attributed to drunk driving has remained constant, at around 30% of the total. Of the 32,367 fatalities recorded in 2011, 9,878 were caused by drunk drivers. What can we do to change that?

Increase education: Drunk-driving awareness programs impact public attitudes. Over time, these programs have made drunk driving far, far less socially acceptable. Increasing the number and reach of such programs would theoretically enhance that effect, encouraging drinkers to reconsider getting behind the wheel, thereby reducing the number of accidents.

Increase enforcement: There's nothing quite like seeing a sobriety test point to get drivers' attention. Beefing up enforcement -- or just the threat of enforcement -- could force drivers to self-police their drinking and driving habits.

Increase regulation of automobiles: Ignition interlocks are often installed on the vehicles of those convicted of drunk driving. Advances in technology have made deploying such systems far less expensive than they once were -- in fact, you may soon be able to put one on your smartphone. MADD is pushing for these devices to become mandatory in new vehicles, which could cut down on the number of Americans who drive drunk.

Drunk driving will probably persist as long as alcohol remains legal. (We tried to change that once. It didn't work so well.)

It would be easy to throw up our hands and say, "Well, there's nothing to be done about drunk driving", but there's always something to be done. The question is, what?