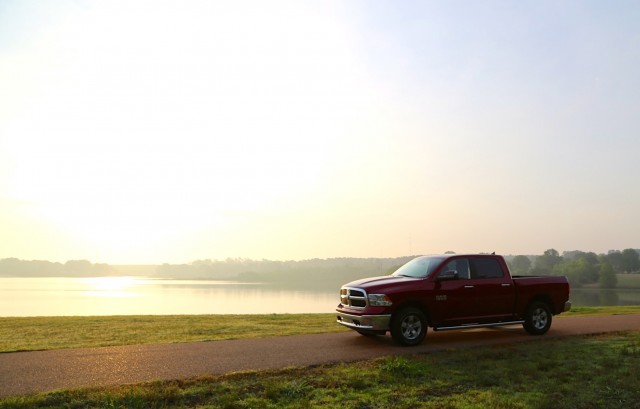 Our 30-Day 2013 Ram 1500 has made its way safely to our Little Rock bureau. If you're following our month of Ram stories--or if you're a follower of The Car Connection on Instagram--you knew that already.

But if you didn't, you missed a journey across the northern tier of the deep, deep south that included a test of our first Ram accessory, a Napier truck tent, and a cut across a Mississippi Delta without a handful of cars for dozens of miles.

We sent the SLT Crew Cab west on a mission. On purpose, the first two weeks of its HGM stint were spent in Atlanta, doing suburban chores. Of the millions of pickup trucks sold each year here, a sizable chunk of them are sold to people who don't tow or haul very often. They're personal-use vehicles with a more rugged flair--so we tasked the Ram with some of those typical duties and took note of its urban-cycle fuel economy, which we'll report on later this week. In Little Rock, we'll have better access to more hardcore pickup tests--towing and off-roading key among them.

In between, the Ram picked up admirers as it cruised west on I-20 from Atlanta, up the future I-22 outside Birmingham to near Elvis' shrine in Tupelo, Miss. Cutting due west from Tupelo, the Ram parked overnight at Lake Sardis for some lessons in truck tenting. Then before the rest of the world could get moving on Sunday morning, it cut across the Delta, the only thing on US 315 for miles at a time, other than game birds and a trio of former armadillos.

In Arkansas, the Ram 1500 will be taking a visit to an off-road park, proving its mettle as a race-car tow vehicle, and performing assorted truck chores until it's due to come back to Atlanta.

While we're working on those stories, take a look at our Instagram feed from the road trip west, and stay with us this week as we show you how to score seven-star accommodations, Mississippi-style, and as we report on our Ram 1500 gas mileage so far.

Our 2013 Ram 1500 SLT Crew Cab 4X4 has a busy schedule this month as we put it through towing, hauling, off-roading, and accessorizing, from Georgia to Arkansas and back. Stay tuned for more--follow our Ram 1500 run here, and as always, follow The Car Connection on Facebook, Twitter and Google+.