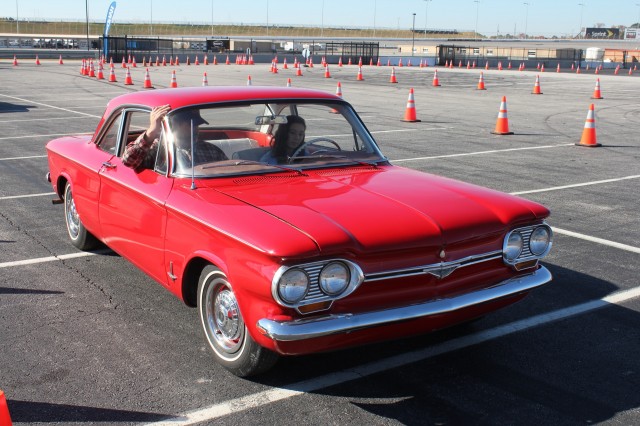 School is out for the summer, or close to it. That creates an eight-hour maw in their day that needs to be filled with something other than Angry Birds, texting, and the Roku. We speak from experience.

If your teens are the kind that are cool with retro stuff like vinyl audio--and aren't against a life lesson being slipped to them in parallel--we suggest a spin at the Hagerty Driving Experience.

Hagerty's a major provider of classic-car insurance, and its driving experience isn't like the typical escorted lap around a big NASCAR oval. For one, it's free. It also offers seat time in classic cars, leveraging the expertise as well as the collections of local owners. And since most of the cars are equipped with manual transmissions, it's exposure to a piece of technology that could be going the way of the cassette--nevermind the compact disc--as you read this.

Hagerty says it conducts the schools because of the perceived lack of interest in teens in driving. They cite statistics from the U.S. Department of Transportation, which suggest just 31 percent of today's 16-year-olds and 49 percent of 17-year-olds even have their driver's license, some of which is due to more restrictive licensing.

The company also believes manual transmissions are a dying breed, with fewer than 1 in 10 new vehicles being equipped with them. Combine the two, and it spells trouble for auto enthusiasm in general.

This year, across six different stops nationwide, the Driving Experience gives new drivers the chance to learn to drive a manual-transmission car through its half-day school. New drivers between the ages of 16 and 25 are welcome to sign up for the chance to learn how to drive cars they may never experience again, while parents get to watch with considerable jealousy.

The school kicks off with a primer on car maintenance basics. While half the group gets its first spin at cars, some of the group learns how they can take care of any car, new or old. That includes those friendly local collectors describing some basics like the operation of a manual transmission, with a working model, to a group that's just as likely to be dissecting a frog in biology class, but it also includes some tips on safe driving as well as keeping regular track of fluids and other maintenance needs.

At a recent stop in Atlanta, the Driving Experience pooled some of Hagerty's own fleet with cars from local owners' clubs, to give a group of a dozen teenagers their first stint behind the wheel of cars almost universally older than them--in some cases, three times older.


Some very well-kept examples at Atlanta Motor Speedway included a 1967 MG Midget, on display for the car-care segment of the day (of course). On the track, drivers could choose from classics like a 1965 Dodge Dart GT; a 1964 Chevy Corvair; a 1975 Morris Mini; a 1975 MGB; and a 1991 Mazda Miata, which apparently qualifies as a classic, as if you didn't feel old enough. For a modern twist, one very popular owner brought a 2005 Ford Mustang GT convertible.

Owners outnumbered the drivers 2-1, and rode along shotgun as the newbies piloted their way around a basic cone course studded with stop-start exercises. For the first few laps, there were lots of hitches, judders, and stalls--and many stereotypes were overturned. One run-and-gun male couldn't keep the Mustang running between clouds of clutch; at least one teen girl glided through the course flawlessly on her first time ever in a manual, in the Corvair.

Two stops on this year's tour have already taken place, but a few remain, including June 7, in Denver; July 12, in Orange County, Calif.; August 2, in Toronto; and Sept. 21, in Las Vegas, Nev.