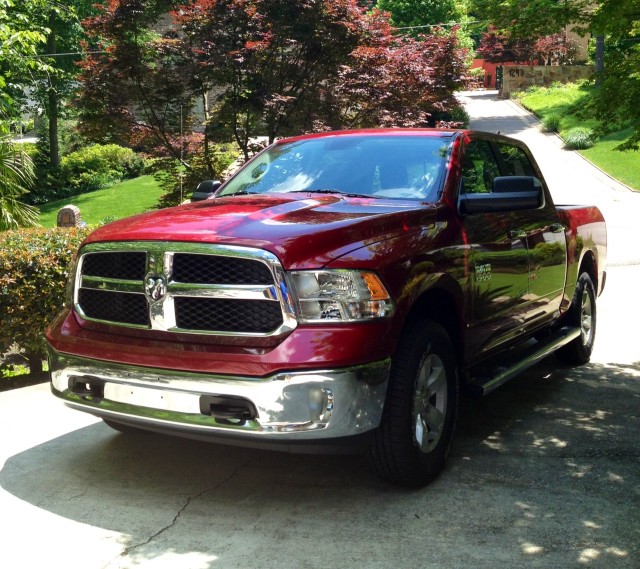 You know by now that The Car Connection is spending this month in the sturdy embrace of the 2013 Ram 1500. As we round up on week one, we're already finding some favorite features of the revamped pickup truck, with a quibble or two reinforced from our first drives last year.

When we drove the 2013 Ram 1500 last year outside Nashville, we came away impressed with all the iterations of the latest Ram, but most curious about the V-6 versions--the ones that promised 25-mpg highway fuel economy. That's how we ended up with our Ram 1500 SLT V-6, albeit a Crew Cab 4x4 rated not at the highest fuel economy of 18/25 mpg, but at 16/23 mpg. So far, since we've zeroed out the meters, topped it off, and run it exclusively on an urban cycle with varying amounts of cargo in the bed, we're seeing an indicated 16 miles per gallon. It's a fair showing, since that's at least a few digits ahead of most of the trucks we've driven in the past year--and fair since, at least part of the time, the Ram's been laden with a fair amount of cargo.

We're happy so far with the way the Ram's handled moderate amounts of payload. In this trim, it's rated to carry 1,615 pounds in its bed. Our lumbar discs can vouch for loading up the 5.75-foot short bed almost perfectly level with this season's bagged mulch, good for at least two-thirds of that if not more, thanks to soaking rains. Without any uphill stretches to test, the Ram pulled away deliberately from stoplights, but without any struggle. A lighter bed load of Ikea furniture gave the drivetrain more breathing room, for sure. We have noticed an occasional hesitance to shift out of Park from the rotary shift knob--and there's a ghost-limb moment where you'll reach for a shift lever time and time again, until you're mentally trained to grab instead for the shift dial.

Structural changes in the 2013 Ram 1500 have given it a stronger but lighter frame. Trucks, even four-door ones, still can't approach the drum-tight levels of rigidity of an average passenger car, and the Ram 1500 has some cowl shake and body movement when it goes over wide road junctions--from asphalt pavement to concrete bridges joined by metal, for example. The air suspension fitted to our truck adds a hovercraft-like layer of smoothness to already smooth pavement, but like any 4x4 pickup, it can tremble when riding on an empty bed and a jumbled surface.

From the inside, the Ram's front bench seat couldn't give a more commanding view of the road--and yet, tall drivers might have to duck their ten-gallons to get in under the Ram's roof on its plush, high-riding seats. We miss the telescoping steering and blind-spot detectors of our last set of road-test vehicles, but the rearview camera's a godsend for backing up our curved driveway. There's so much storage inside--rubber-lined trays on the dash, on the floor, under the middle front seat, under the rear left seat--we've committed to spot-checking everything before locking up, just to make sure there's no Happy Meal left behind. (The smell after a day...) And UConnect? We're playing with more features, but Bluetooth streaming's been flawless thus far.

The most telling take on our Ram 1500 so far? Within an hour span, the thirtysomething guy in the orange apron and the seventysomething lady in the hand-stitched one both complimented it deeply: "That's some truck." Indeed it is.


Our 2013 Ram 1500 SLT Crew Cab 4X4 has a busy schedule this month as we put it through towing, hauling, off-roading, and accessorizing, from Georgia to Arkansas and back. Stay tuned for more--follow our Ram 1500 run here, and as always, follow The Car Connection on Facebook, Twitter and Google+.