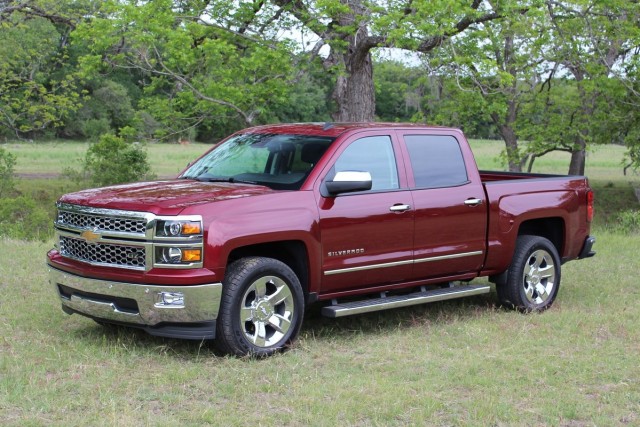 Everything's bigger in Texas, and Texans love their trucks.

As we got our first drive time in the new 2014 Chevy Silverado this week, in Hill Country near San Antonio, we couldn't ignore how those two ideas continue to help put wind in the sails of the U.S. truck market. Going over well in the Lone Star State is crucial; it accounts for about one fifth of the nation's pickup sales, and well over one in four vehicles sold in Texas is not just a truck, not just a pickup, but a full-size pickup. They're everywhere here—the biggest, brawniest-looking ones.

Meanwhile, Americans elsewhere are wondering why full-size trucks need to keep becoming bigger and blunter. And it's an odd contrast in an era in which Americans are more amenable to the idea of smaller cars and crossovers: that when it comes to trucks, some different, old rules apply. A new mid-size Colorado is on the way; but well before then, entirely revamped light-duty 2014 full-sizers are arriving.

Of course 'light-duty' is a misnomer today. Most versions of so-called half-tons have cargo-payload ratings well exceeding 1,500 pounds, and the significantly refreshed 2014 Silverado does its best to look heavy-duty, flexing its muscles more than ever before on the outside, and taking after the current Silverado HD trucks. There's a more imposing front end (now with as much vertical distance up front as the HD), a dual-dome hood, and a more chiseled look overall; GM has even squared off the wheel wells just a bit more to accent the profile.

“Bigger and bolder is an extension of individuality for truck buyers,” said design director Tom Peters, who gave the truck its new look; and that holds true especially in Texas, he admits.

Although some of the U.S. pickup market craves a smaller 'full-size' model—to paraphrase what a GM official conceded—we can’t afford to lose Texas either.

Of course what's under the hood matters tremendously, too, to truck buyers everywhere—as do tow ratings, performance, and more recently, fuel economy. Ford, with its surprisingly successful EcoBoost V-6, has turned to turbocharging. But GM is bucking that route, not at all downsizing but instead completely re-engineering its V-6 and V-8 engines for GM's new-generation trucks, including the 2014 Silverado, the 2014 GMC Sierra, and its upcoming SUVs that include the Chevy Tahoe and Suburban, the GMC Yukon, and the Cadillac Escalade.

All three so-called EcoTec3 engines are built with several core attributes: direct injection, variable valve timing, and cylinder deactivation technology. And compared to their predecessors of the same displacement, they produce dramatically more power and torque, with much-improved fuel economy figures. In short, GM argues that while EcoBoost might save fuel on the EPA cycle, this strategy saves fuel in the way that trucks are really used, when under higher load, and in towing and hauling.

We knew we were up for a perkier driving experience, stronger towing, more confidence with a load, and all that. But the new V-6 engine—every bit as modern as the 5.3-liter but with two fewer cylinders—is a revelation.

The V-6 is not only responsible, in a forward-thinking, let’s-use-less-fuel way; it comes darn close to making the 5.3-liter V-8 redundant if you go not by the number of cylinders or the lack of a V-8 exhaust burble but by acceleration. With 285 horsepower and 305 pound-feet of torque, this engine feels just as strong as GM's V-8 engines did less than a decade ago (in fact, it's the same torque rating as the most recent generation's 4.8-liter). Cover the ears of drivers to block out its very-V-6 sounds, and they'd peg it as a naturally aspirated V-8.

We were astonished that, despite all the work that GM has put into this excellent new V-6, it still estimates that about three-quarters of shoppers will go for the 5.3-liter V-8. Including the upcoming 6.2-liter, which will be the choice for those with truly serious towing needs, that means only ten, maybe 15 percent will think the V-6 enough?

That said, Chevy truck buyers have been let down before with some underwhelming six-cylinder engines—such as the lumpy and weak former 4.3-liter (also small-block based, but never as fully baked, or conceived for trucks), or the smooth yet very thirsty 4.2-liter Atlas six (from the Trailblazer, and originally intended for more trucks). The 4.3-liter seems burdened with its badge, as it’s so much better.

That's not the case here: Who needs all 11,500 pounds of towing capability anyway? For all the full-size buyers who never tow more than a modest pleasure boat or a trailer of snowmobiles or ATVs, this V-6 has more than enough muscle for the job. We towed a 4.700-pound camper-trailer with the V-6 and had no problem merging into rapidly moving traffic or maintaining speed on the region's sudden, rather steep hills.

First off, the aluminum-block V-6 has an additional balance shaft to keep it smooth, and it stays seamless and unobtrusive, even though the instrument display shows that it's a surprisingly aggressive cylinder deactivation strategy—aided in part by a special flapper valve in the exhaust that helps prevent resonance. We saw it running on four cylinders whenever we coasted or decelerated, and even for a time when we were maintaining about 50 mph. V-8 models revert to V-4s as well under light load.

Fuel economy ratings aren’t out yet either for the V-6, but what we saw anecdotally in a test drive might prove the automaker’s arguments true. On a 42-mile loop of hilly two-lane country roads, we averaged 23 mpg in a V-6—when driven normally, and a bit briskly. In about the same kind of driving—unloaded, on empty but hilly two-laners—we saw in the range of 19-20 mpg according to the trip computer (the V-8’s rated at 16 mpg city, 21 highway).

Of course, the temptation is that on these trucks, the V-8 is only an $895 option. This 5.3-liter is a step closer to small-block perfection—as smooth as ever at idle, with that characteristic purr and thrum, yet with a better combination of low-rpm torque and higher-rev passing and grade-conquering power than the pre-variable valve timing engines. By the numbers, it makes 355 horsepower and 383 lb-ft.

The automaker hasn’t yet ramped up production on the 6.2-liter V-8—and it’s saving all the numbers for this engine for a later controlled burst—but based on what we’ve seen in these other two engines we anticipate the largest one to be a heavy-duty-caliber powertrain, for those who want to stick with a light-duty truck for its better ride quality and handling the majority of the time, yet have the capability to haul a horse trailer or heavy construction equipment when needed.

You can indeed get eight-speed automatic transmission in some competing trucks, but the six-speed automatics in these GM rigs still not only do the job, but do it without ever missing a step. Ratios seem right for these engines, which have torque sweet spots as wide as the rack of a Texas steer. Upshifts are never jarring, even when pulling a load, and they're right there with a downshift when you need it.

Drives better in every way

How's the new Silverado drive otherwise? Like the outgoing GMT900 models, only better. Across several trim levels that we sampled, the new Silverado avoids a lot of ride harshness while handling as neatly and predictable as something with its length, heft, and weight distribution can. A new electric power steering system actually feels better than the hydraulic steering before it—precise on center, without requiring too many corrections, and it loads up very nicely off center. Plus it's stout enough to handle an upcoming factory snow-plow option. Meanwhile brake-pedal feel is firmer, with engagement higher up than before; it seems GM has finally realized that even truck buyers don’t like spongy brake pedals.

One of our criticisms of the last-generation trucks was that while they’d sound brawny, like a muscle car, at best, they could also simply be too loud on the highway or under load. This time, Chevy has resisted the urge and really packed in the noise isolation, with top models adding a final hush of engine rumble and road roar with active noise cancellation.

Seats front and back have been redesigned and recontoured; upholsteries are new, from the vinyl in WT models to the cloth and leather elsewhere in the lineup; steering wheels adjust telescopically as well as for tilt; and a heated steering wheel is available for the first time in these trucks.

And forget about the dual interior themes of the last-generation trucks—with one designed to be used with work gloves, the other more premium and carlike. This time it’s all premium, and just a few large buttons and knobs, as well as some voice controls, provide enough redundancy when you don’t want to put your grimy hands on the screen. The driving position, upright look, and straightforward controls are easy to figure out at first glance, while dabbing into the included Chevrolet MyLink system reveals impressive media capabilities, navigation, and integrated Pandora (with a smartphone and data connection)—with more apps on the way.

And with the Silverado High Country model on the way, GM is climbing upmarket with an even more dressed-up look plus luxuries like heated-and-cooled seats, piped leather upholstery, park assist, Bose premium audio, adjustable pedals, and active safety like Lane Departure Warning and Forward Collision Alert.

When these trucks were first shown this past winter, there was some pushback from those who expected a more radical redesign (that’s still on the way in 2-3 years, depending on who you believe). Despite that, GM has focused on the finer details, it seems, fine-tuning performance and what matters, packing in features, and reducing noise and harshness while increasing comfort. Yet there are a few disappointments that we found; for instance, while Chevy has added things like a heated steering wheel, there are no rear ducts for A/C.

So you do need to have a trained eye to spot this as “the new truck.” These new models aren't revolutionary in design, and their powertrains are the same size. It's easy to get lost in those details and write these trucks off for that, but we applaud how GM has focused on the details and the engineering here and produced a very refined, capable evolution of the Silverado and Sierra—one that addresses most concerns about fuel economy, and keeps the Texans satisfied.

The fleet buyers are truly going to be spoiled with this V-6 Silverado. Now let's see that light-duty diesel, and for those who don't need the Texas Toast, some more revolutionary changes in the Colorado.

For more details, see the pages of our full review on the new 2014 Chevrolet Silverado.