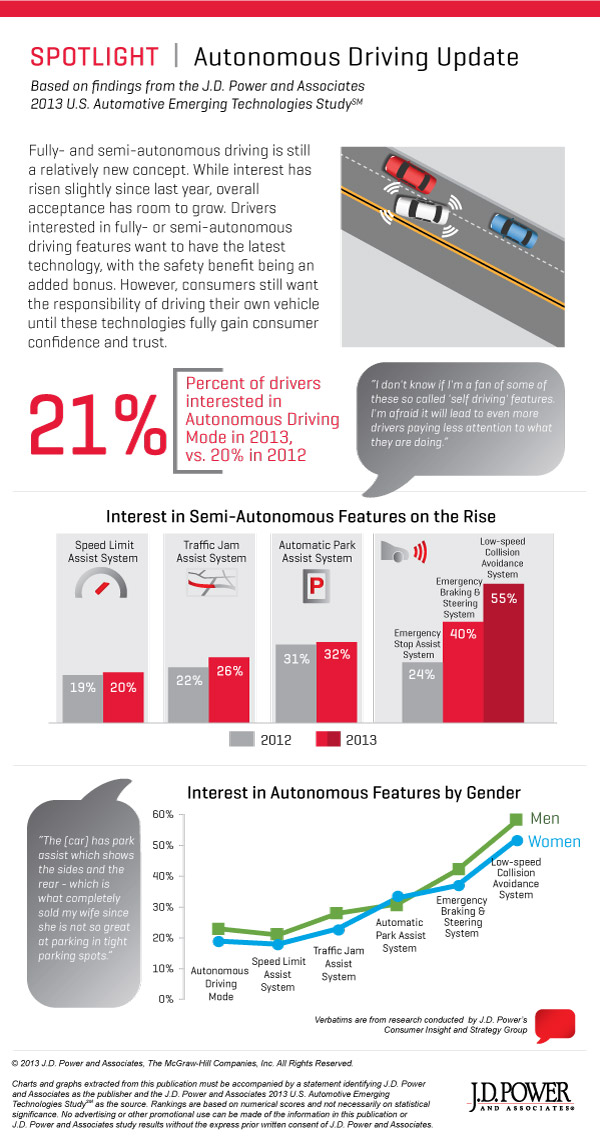 Steve Jobs did some amazing things in his lifetime, but making an Apple car and changing the auto industry were two goals he never achieved.

You could argue that the iPhone -- with its easy access to music, the web, and an ever-expanding catalog of apps -- dramatically altered the way that we interact with the world. We've come to expect environments that are always "on", environments that keep us connected to the internet and to our vast social networks.

That, in turn, has changed what we expect of our cars. As proof, look no further than J.D. Power's 2013 U.S. Automotive Emerging Technologies Study.

This year's Emerging Technologies Study fielded responses from some 16,758 drivers in March 2013. Participant were asked to rate their interest on 22 different technology features.

First, respondents rated those features without knowing the cost they might add to a new car. Then, J.D. Power revealed the prices of each, and customers were asked to rate them again.

Before the pricetags came out, here are the top five technologies that respondents said they "definitely would" or "probably would" purchase in their next vehicle:

After the price revelation, things shifted a bit:

Looking at the demographics of the study uncovered some interesting and not-so-interesting facts. Millennials, for example, were the most interested in the ability to link their smartphone to their vehicle. However, Early Boomers (i.e. those born between 1947 and 1953) registered the biggest increase in that area: compared to 2012, Early Boomers' interest in the "Device/application link" feature was up 7% and 14% before and after prices were revealed, respectively.

But most interesting of all was this little tidbit, pulled from J.D. Power's official press release: "Consumers believe that vehicle infotainment systems are inferior to their smartphones and tablets and want more mobile apps and control of software updates to integrate with their vehicle."

For more stats from the survey, check out the infographic above.