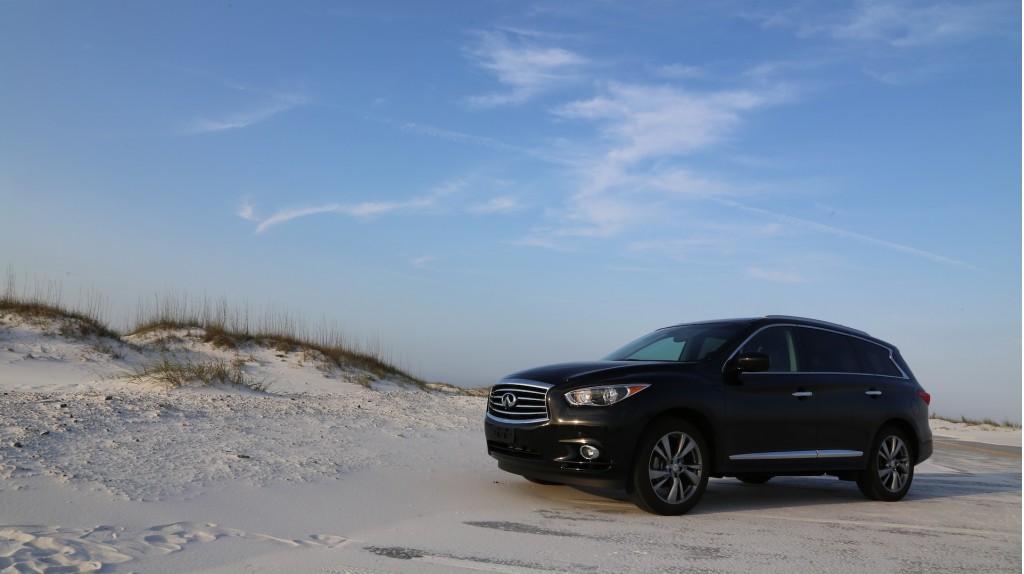 As we wrap up our Three-Month Road Test of the 2013 Infiniti JX, it's time to take a look back over the pages of fuel logs, and to report on the gas mileage we earned over its extended stay.

First, some background. The JX is rated by the EPA at 18 miles per gallon city, 23 mpg highway, or 20 mpg combined when it's equipped with all-wheel drive, as was our loaner. With front-drive, the JX picks up a mile per gallon highway and combined, for an EPA-rated 18/24 mpg, or 21 mpg combined.

What does that compare with? Well, for starters, the front-drive Nissan Pathfinder that shares the JX's drivetrain is rated at 20/26 mpg, or 22 mpg combined. With all-wheel drive, it's pegged at 19/25 mpg, or 21 mpg combined. The differences come primarily from the added weight of more standard equipment on the Infiniti, and some slight differences in throttle and transmission tuning.

Against its top competitors, the Infiniti JX fares well, though its CVT doesn't offer a huge benefit versus some six-speed automatics. We've highlighted some key figures below to show how the JX lines up with the vehicles we consider its best alternatives. (Note: we've compared the non-turbocharged Ford vehicles here; the 2013 MDX only comes with all-wheel drive, while a front-drive model arrives for 2014.) 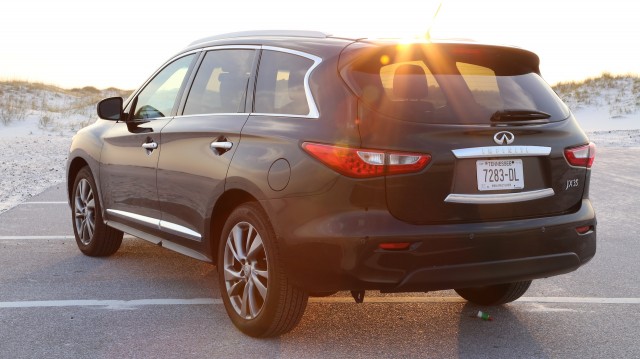 While it stacks up well with the luxury-crossover crowd, our real-world gas mileage fell shy of the EPA combined figures--but well within the 20-percent band of that number that the EPA considers normal.

Over 10 tanks of premium unleaded fuel, our 2103 JX averaged 18.8 mpg, indicated by the numbers below. Our best tank turned in 21.2 mpg, with the low number checking in at 16.7 mpg. The JX seemed to be extraordinarily sensitive to temperature loading: the best gas mileage came on a pure highway stint with 60-degree dry weather, while the worst mileage showed up on the tank filled after a deep winter chill and lots of city-cycle driving.

In order, we measured these gas mileage figures on those 10 tanks, filling up each time, logging mileage, and rounding to the nearest tenth of a mile and gallon:

Call it expectations met. You'll probably get better mileage in a minivan, not to mention better sliding-door functionality--though you'd have to give up those premium badges in the process.

There's still more to come with the JX35 before we're done. In the next week, we'll show you all the JX can do in our upcoming video road test, and wrap up our extended stay with the new luxury crossover.

In the meantime, read the rest of our Three-Month Road Test coverage, and see our full review of the 2013 Infiniti JX--and of course, stay in the loop with us on Facebook and Twitter.