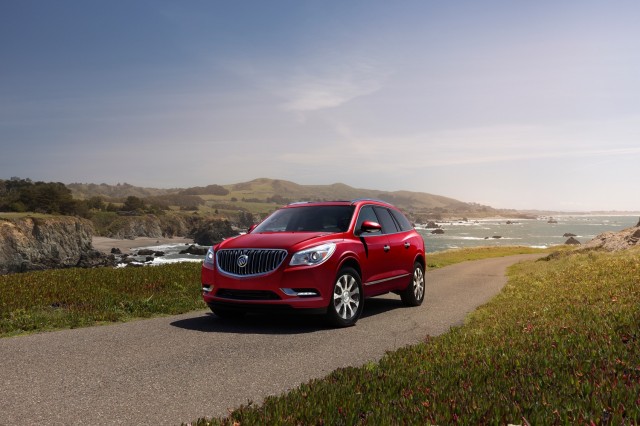 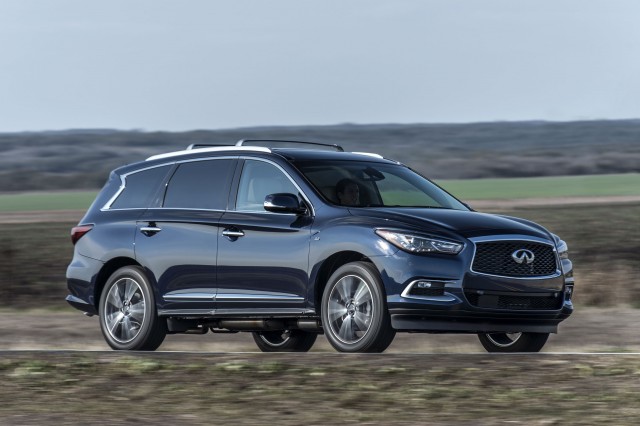 The Infiniti QX60 and Buick Enclave are upscale picks for the "anything but a minivan" set, but how do these family wagons—sorry, SUVs—stack up against each other?

Let's dive into the numbers to find out.

First, we're happy to report both 'utes have undergone our rigorous new ratings system. By the numbers, the Enclave gets a slight edge (and we mean slight) in the overall score, but the details are a see-saw. (Read more about how we rate cars.) 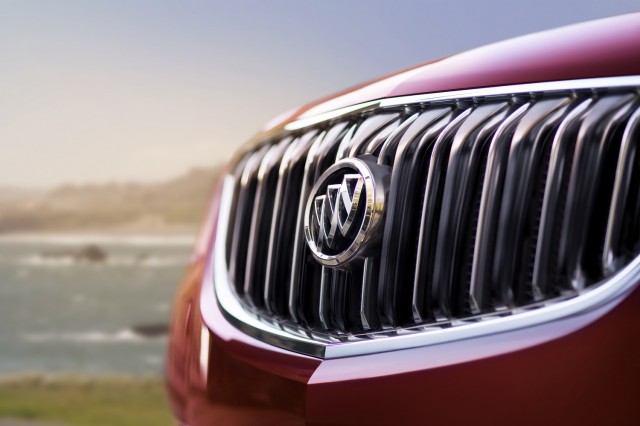 On the styling front, both the Enclave and the QX60 have winning looks, but the Buick looks just a little better. The Enclave's been with us longer, and only mildly refreshed for the 2013 model year—but it's a curvy, classy shape that's aged very well, and now has an interior with the universally high-quality trim it's wanted since launch. The QX60? It's what the Mercedes R-Class always wanted to be, a harmonious shape that fits a crossover body into a design language that's shared by other new Infinitis, down to the highly sculptured front fenders and the arrow-themed rear pillar. That signature detail points the QX60 forward distinctively, while other SUVs just round off the rear and leave it at that. Inside, the Infiniti's dash has muted wood trim and a minimum of cutlines, the premium feel dialed up with luminescent gauges and marred just a little by inexpensive plastic "chrome" on the shift-mode selector and seat-climate controls.

Performance is in Buick's favor too. Both the Enclave and QX60 rely on big V-6 engines for output, and both have a sole transmission. The QX60 sounds more urgent, possibly because its continuously variable transmission vaults the V-6 into the meat of its powerband and leaves it there for a more gutsy feel and a little more powertrain noise. The Buick's more relaxed drivetrain has more V-6 power, and a conventional automatic transmission with better shift logic this year than before. The QX60 may be shy on output, but drives with more involvement; it has better steering than the Enclave, which has a more hefty feel but a better sense of ride control than the Infiniti.

If it were always put to eight-passenger use, the Enclave would outpoint the QX60 every time for sheer capacity. The Infiniti's only a seven-seater, and its rearmost bench seat sits low to the floor, with less headroom, than the one in the eight-seat Enclave. Outside of that extreme duty, it's the Infiniti that holds the edge in flexibility. Its second-row seats slide and fold up to make third-row access much better than the Enclave, while both have reclining second-row bench seats, which in the Enclave can be swapped out for captain's chairs. Both have enormous cargo capacity, with somewhat high cargo floors balanced off by power tailgates and excellent small-item storage. 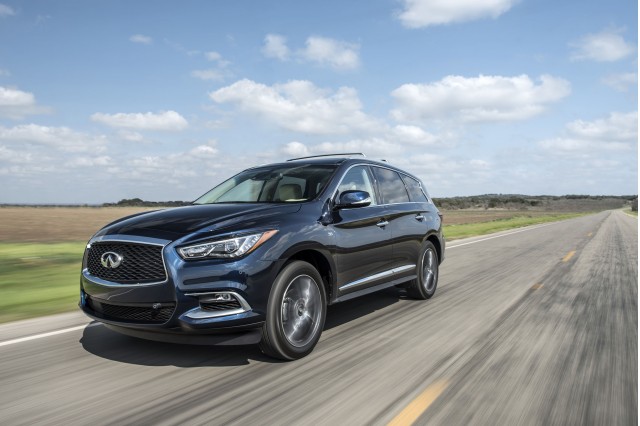 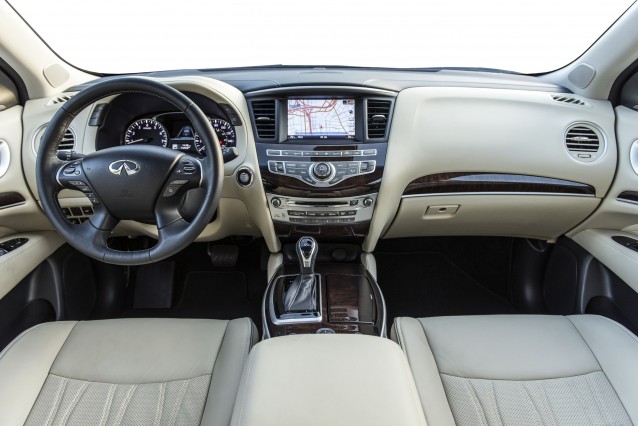 In safety, there's a clear winner between these pricey 'utes. The QX60 simply has more data. It's a Top Safety Pick+ by the IIHS and gets a five-star overall score from federal testers. The Buick gets the same score from the feds, but hasn't gone through the same battery from the IIHS. It's likely that it won't in the current format either.

Luxury features from navigation systems to voice-controlled infotainment systems keep the race tight too. The Enclave's displays are brightly colored and more intuitive, with more smartphone-connected capability built into them. The QX60 has more complex controls on the dash, less voice control, and a less well-developed infotainment system in general—though every one comes with four years of Infiniti Personal Assistant, so that web requests can be handled by humans other than the driver.

By our overall review numbers, the Buick Enclave narrowly wins this head-to-head comparison—mostly on its looks, quiet ride, and performance. The Infiniti is a little more fuel-efficient, but not enough to topple the mighty family wagon from Buick. Err, we meant crossover.

7.0
Expert Rating
The Buick Enclave won't go anywhere very quickly, but it will be plenty comfortable wherever it goes.
Read More
5.0
Expert Rating
Infiniti has improved its crossover's ride quality, but it remains unsettled against rivals. And its CVT does it few favors in the refinement department.
Read More

5.0
Expert Rating
The aging 3.6-liter V-6 won't impress, but for a three-row SUV, the Enclave is acceptable.
Read More
6.0
Expert Rating
At 22 mpg combined, the Infiniti QX60 is about par for its class.
Read More

Front Wheel Drive Read Full Specs
Front Wheel Drive Read Full Specs
Compare Free Dealer Price Quote
With competitive price quotes from multiple dealers, you will be prepared when you meet your local car dealer. Please tell us how to contact you so that dealers can compete for your business!
2017 Buick Enclave
There are no Buick dealers in our network that are located near the ZIP code.
2017 INFINITI QX60
There are no INFINITI dealers in our network that are located near the ZIP code.
Thank you!
We have sent your request for price quotes on the 2017 Buick Enclave and 2017 INFINITI QX60 to the dealers you requested. They should be in touch shortly.
The Car Connection's dealer quote process is powered by our partner site CarsDirect.
Your request for a fast, free price quote on a 2017 Buick Enclave and 2017 INFINITI QX60 is in process. The CarsDirect Dealer(s) listed below will contact you shortly to discuss your request and to provide a quote. If you have questions now, you can contact the dealer(s) directly using the information provided below or contact CarsDirect's award-winning customer service team at 1.888.CarsDirect (1.888.227.7347) or [email protected]
For your reference, your customer transaction number is .
Tell us a little bit about yourself
Looking for dealers in your area...

*As configured. Excludes taxes, title, license and other customary fees, such as dealer documentation fees, tire and battery disposal fees and, where applicable, finance charges. By clicking on “Get Your Price Quote Now”, you agree to our Terms of Use (including the Supplemental Terms) and Privacy Policy. You further consent to being contacted at the number you provided by CarsDirect and certain participating automotive dealerships, which may include autodials, text messages, and/or pre-recorded calls; this consent is not a condition of purchase or service. Message and data rates may apply.
Have feedback about this experience?
Let us know.
Tags:
2017 Compare Cars INFINITI News INFINITI QX60 News
2021
The Car Connection
See the winners »
2021
The Car Connection
See The Winner and Nominees »