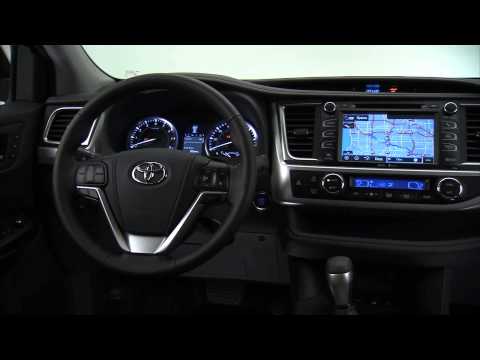 Toyota has introduced the third-generation Highlander, renewing its lease on the family crossover space with more refinement and updated styling.

While the Highlander has indeed grown longer, that extra length isn't found between the wheels, meaning the interior will be about the same size as the last generation. There are three rows of seats in every Highlander that can accommodate up to eight passengers. The second row can be optioned with either a three-person split-bench seat with a reclining feature, or a pair of captain's chairs. Opting for the bench-seat configuration will provide easier access to the third-row seat thanks to a sliding feature. Toyota's also increased cargo space behind the third-row seat.

For 2014 the Highlander boosts its safety equipment with eight standard airbags and a rearview camera. There's also a hill-start assist feature that is standard on all Highlanders. The options list now includes blind-spot monitors, a lane-departure warning system, and parking sensors.

Under the hood you'll find one of three engines. The base Highlander is powered by the same 2.7-liter four-cylinder engine and six-speed transmission as the new 2014 RAV4. There are also two V-6 models, one features the same 3.5-liter design as the last-generation Highlander with 270 horsepower and a six-speed automatic transmission. The other one is the Hybrid model which pairs an electric motor to the V-6 engine. All-wheel drive is available on the V-6 model and standard on the hybrid model.

Pricing for the new 2014 Toyota Highlander will be announced later this spring before it goes on sale.

For more information on the new 2014 Toyota Highlander be sure to read our full review here.