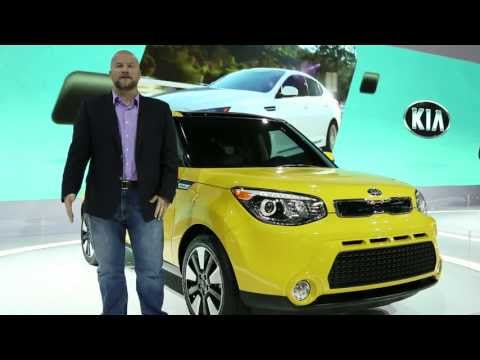 With the new 2014 Soul first shown at the New York Auto Show, Kia hasn't exactly wiped the slate clean, but it's made some meaningful changes to this little wonder that make it look sportier, perform more athletically, and even add more features and functionality compared to the first-gen versions.

Thankfully, the basic formula stays the same. Simply put, the Kia Soul is the small car that a lot of American commuters want--even if they don't already know it--as it adds a lot of the advantages of crossover designs, while handling and sipping fuel like a subcompact.

New front and rear styling helps tighten the look in front, with a thinner grille and larger lower air intake, plus new fog lamps and LED lighting. Inside, the Soul gets soft-touch plastics and new piano-black trims, while passenger space is up throughout and the new Soul is even supposed to be a little quieter. A new UVO smartphone-based connectivity system with eight-inch touch screen is the highlight of the dash, and navigation can be added to it.

Under the hood, the base engine is a 130-hp, 1.6-liter four, while some models step up to a 164-hp, 2.0-liter four., with six-speed manual and six-speed automatic transmissions on offer and new electric power steering with three settings, plus a retuned suspension.

See our preview of the 2014 Kia Soul for more information, and see all of the sights, highlights, and details from the New York Auto Show.