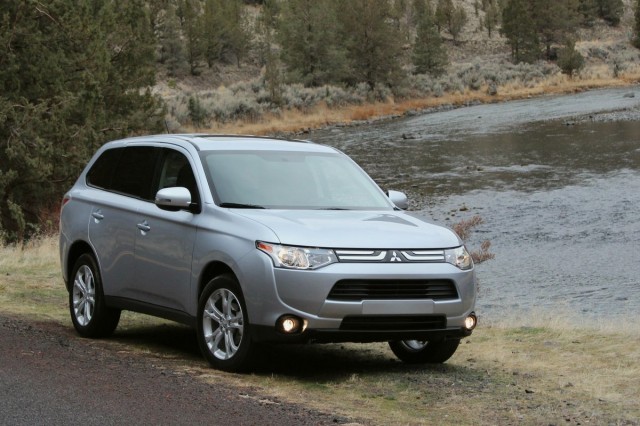 Can Mitsubishi still prove itself relevant in the U.S.? With the quirky Endeavor long gone, the flamboyant Eclipse coupes and convertibles now discontinued, the last Galant mid-size sedans carrying clearance stickers—and no replacement on the horizon for the Evolution sport sedan—you could argue that the brand is giving up on us.

Not so, officials insist. Led by the new 2014 Outlander that will begin arriving later this spring (and followed later this year by a new subcompact based on the Mirage), Mitsubishi at last has fresh product for the showroom.

And Mitsubishi isn’t messing around this time with niche appeal. In short—and in what smacks somewhat of a last-ditch strategy to pump its sales back up—the Outlander drives and feels, in many ways, as if the previous generation hadn’t existed.

That bears some explanation: With the last-generation Outlander, this crossover took a step toward the sporty side. But quite a lot of road harshness came with its sharp handling and good body control; and it was one of the heavier models in the class. And a lot of people simply didn’t get what we considered some of its better features, like the useful clamshell tailgate.

Still the Outlander, no longer the outlier?

The new Outlander is positioned more directly against strong sellers like the Toyota RAV4, Honda CR-V, and Subaru Forester. And it matches those vehicles in most respects, while beating them in features for the money.

The fundamentals look and sound like what you get throughout most of this class: There’s a 2.4-liter four-cylinder engine and a CVT (Outlander ES or SE), or a 3.0-liter V-6 and a six-speed automatic (Outlander GT), and power is delivered through either front-wheel drive or all-wheel drive. And with an overall length of about 183 inches, the new Outlander is right in the middle of the compact-SUV market—with most of those models recently updated.

Out on the high-desert roads of central Oregon, near Bend, we recently had the chance to put several versions of the 2014 Outlander to the test, and we found that spanning from the Outlander ES up to the Outlander GT V-6, there’s quite a difference in how this vehicle carries itself down the road. The ES four-cylinder that we spent the most time with was much more tossable and light-feeling—softly sprung yet agile, and a bit charming in the way that Japanese vehicles used to be.

The Outlander GT V-6 model no longer feels like a performance-tuned version. While Mitsubishi has cut up to 220 pounds from some versions of the Outlander, here especially the softer springs and in general more body motion signal that this is a model with more power but not the kind of performance chops as before. Yet big steering-wheel paddle-shifters do hint that this is the model for enthusiasts.

Base engine fits right in, but V-6 is underwhelming

Compared to the four-cylinder models, we don’t really see the GT as satisfying, or sensible. From the driver’s standpoint, it’s noticeably more nose-heavy, with a heavier steering feel (officials say the gear and even boost level is the same), and more awkward body motions in tight corners. There’s a lot of body lean in either of these versions, but in either case it’s a better handler than the CR-V; you can slingshot out of tight corners with plenty of confidence in the four-cylinder models.

While the V-6 sounds great when you’re wringing it out; it doesn’t feel that much stronger, and our anecdotal, seat-of-the-pants acceleration check pointed to it being a half-second better to 60, at best. There’s a nearly 300-pound difference between the two, and it makes just 224 horsepower and 215 pound-feet of torque and doesn’t churn out all that much torque at low revs. Takeoffs are quick only because of the six-speed automatic’s much lower first-gear ratio. And in addition to its lack of potency, premium fuel is recommended. Skip it.

The four-cylinder engine and the CVT are actually a good pair for commute-style driving. Just as with some other new CVTs, the calibration of this one is better, leaving the powertrain more at ease, keeping revs low when you’re just plodding along in traffic. Get more on the gas and there’s some of the familiar rubber-band effect, but this new engine’s stronger at the low and mid revs, so that helps. But surprisingly—considering Mitsubishi’s leadership in direct injection in other markets in the late ‘90s—there’s still none of that technology for us here.

No matter which powertrain you get, there’s an Eco Mode switch that when engaged, cycles the air conditioning compressor more conservatively, to save energy, and makes accelerator tip-in less aggressive. We didn’t sense all that much of a difference between modes, and it was just a bit easier to take off gently and smoothly in Eco.

In an all-wheel drive model, we clambered up a steep, dusty, and somewhat rock-strewn trail almost effortlessly, thanks to a system that incorporates an electronic differential that manages power left-to-right in front, combined with electronically controlled distribution front-to-rear. You’ll want to take that trail in normal mode, however, as in Eco Mode the four-wheel drive system runs in a front-wheel drive mode until slip is actually detected.

Mitsubishi claims to have significantly improved refinement, with better isolation of engine vibration, and some changes to suspension geometry that it says reduce unsprung weight. There’s also more insulation in the dash, floor, and headliner. So even with the four-cylinder—and on the coarse rural road surfaces in Oregon—this is a surprisingly quiet, tight-feeling vehicle.

And it’s not from the driver’s seat, but in practicality and packaging, where the Outlander has some very significant advantages over the competition. The Outlander has one significant—very significant, depending on how you plan to use this vehicle—advantage: it offers third-row seating, to fit up to seven. Front seats are a bit better and more supportive than what’s typical, and the second row has enough headroom and legroom for taller adults—even this 6’-6” editor. Only you won’t ever forget that this is a compact, as the third-row seat is only good as a backup plan for kids, and getting in and out is pretty much out of bounds for adults. Large-shouldered adults won’t be able to get comfortable three-across in the second row either.

Seat-folding involves many more steps than you’d expect—including lifting and flipping forward the lower cushion, removing the second-row headrests, clicking an unlock lever, and then releasing the seatbacks to flip those forward. Yet the effort is definitely rewarded; the Outlander has a lower cargo floor than other vehicles in this class, and it’s nice and flat (and 13 inches longer than the outgoing Outlander, Mitsubishi says). Plus, you get good underfloor storage, and bins at the side of the cargo area for smaller items.

We’ve left styling almost for last, as it will no doubt be the biggest disappointment to some. A company official noted that the brand wants to be known for function and simplicity in interiors—and it gets that much right—but what’s sorely missing from the new Outlander’s cabin design is flair. Give the automaker credit for going a bit against the grain. Mitsubishi says that the new front-end appearance is the way it is for aerodynamics (coefficient of drag is a low 0.33), and to set a new, efficiency-minded look; but compared to the aggressive, memorable ‘shark-nose’ front end of the previous generation, it strikes us as bland.

Other standout active-safety features that you won’t find in most other affordable compact crossovers include Adaptive Cruise Control (with three distance settings), Lane Departure Warning, and a Forward Collision Mitigation that will, at lower speeds, first signal that an obstacle or other vehicle is ahead and then brake the vehicle fully to a stop.

A bargain if you shop by features... and aren't hung up on the brand

Official pricing won’t be released until the 2013 New York Auto Show, but Mitsubishi has hinted that pricing may actually drop on some of the 2014 Outlander models, versus 2013 (when they started at $22,695). Base ES models don’t include Bluetooth or alloy wheels, but if you can look past that they include automatic climate control, keyless entry, and a six-speaker, 140-watt audio system, among other things. ES models add push-button start, dual-zone climate control, heated front seats, and a touch-screen system with the FUSE HandsFreeLink system and a rearview camera—and an interface that’s superior to what’s offered in most other rivals. With the V-6 GT you can get leather, a sunroof, and the power tailgate.

Overall, whether you look at the Outlander or the Mirage that’s soon anticipated in the U.S., Mitsubishi appears to be taking a position in the market that’s closer to what Kia and Hyundai occupied some years ago—high value, with bland but inoffensive styling and least-common-denominator driving dynamics. To those who know Mitsubishi’s past product glory and technical prowess, it’s a little disappointing.

If you start by cross-checking prices and features, and what matters is that you have an affordable, safe family vehicle with a new-car warranty, the Outlander is that. If shoppers can look past both the bland exterior and the Mitsubishi badge—and those are significant hurdles—what they’ll find is a decent, pleasant-driving, very competitive crossover that hits the mark in many ways. Especially value.