Lamborghini Veneno: The Hypercar That Surprised Even Its CEO 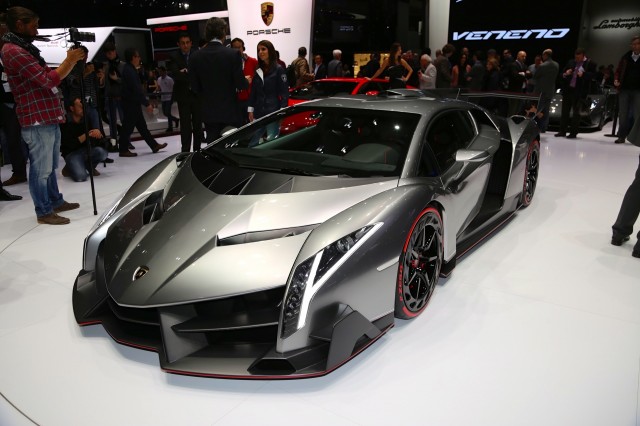 Of all the hypercars on display at this week's Geneva Motor Show, the Lamborghini Veneno may go down in history as the least rational and most astonishing. With only four copies total to be made, the 220-mph, $4.6 million carbon-fiber is a lawn dart aimed right at the heads of the competing McLaren P1 and LaFerrari, launched almost simultaneously on Tuesday.

The Veneno might also be the only car in recent memory to go from sketch pad to show floor without a final glance of approval by the company's CEO. In the rush to get it ready for the annual auto show, the only complete Veneno in the world went right to Geneva's Palexpo center before Lamborghini CEO Stephan Winkelmann could see it complete for the first time.

While it launches concept cars in other venues like Paris or even Pebble Beach, Lamborghini says only the Geneva Motor Show would do as the venue for the debut of the Veneno, a tribute to Lamborghini's 50th anniversary, says Maurizio Reggiani, director of research and development.

"Geneva is the most important venue in the world," says Reggiani, "Every supersport brand tries to have something to say: 'This is my vision of the future.'"

Geneva, he adds, is where the company puts out its most important news, and models, like the Aventador and Gallardo, reserving concepts like the Urus and Estoque for auto shows like Paris, Shanghai, even The Quail, to gauge public opinion, "to attack the market and to see the reaction, to allow us to take a decision" on whether to proceed to production or not.

A most extreme statement

This year, the statement from Lamborghini is arguably its most extreme yet.

"We want to say, this is our DNA. Nothing is forbidden to Lamborghini. We can be extreme in design, in technicality, in use of different materials, in different technology."

The mission handed to Reggiani and his engineers was to also make a car that could be fully homologated, and sellable.

The result is the Veneno, a name like every other Lamborghini, coined from a fighting bull, but also derived from the Spanish word for venom. Its Le Mans-ready look aside, the Veneno has 740 horsepower courtesy a 6.5-liter V-12 engine, a 0-60 mph time estimated at 2.8 seconds, and a top speed figured at 220.5 mph.

The engine is naturally aspirated, and Reggiani says for now, at least, that's a Lamborghini hallmark--in marked contrast to the hybrid packs added to the McLaren and Ferrari hypercars also on the Geneva show floor.

He acknowledges that those other hypercars are changing the equation--but still insists there's no need yet to alter Lamborghini's reliance on conventional powertrains.

"We see the road, we see the landscape of what is happening in the future. For us [it] is, what is the best in terms of sportiness to maintain our DNA? Until it is not a must, naturally aspirated is perfectly fitted in our DNA."

The car is developed to a top speed that's not coincidentally higher than the figures quoted for both the LaFerrari and McLaren P1, but far off the benchmark set by another VW Group hypercar, the Bugatti Veyron. Reggiani insists the Veneno's development wasn't held back by anything, and confirms it's been tested in prototype form to its top speed at Italy's Nardo test track.

"We decided in the end, 355 kph [220.5 mph] is a good number," he says, "something we can achieve without trouble. You are really at the limits of the car. I think about the customer and I say, this is enough."
Aero force

More than being outrageous and timely, the Veneno's aim is to deliver race-ready aerodynamics, not an ultimately low coefficient of drag. The balance, "moment by moment," between aerodynamicists and designers, Reggiani says, was the biggest challenge in getting the Veneno's carbon-fiber-reinforced plastic skin molded into the right shape for strong downforce and high-speed grip.

Wrapping the monocoque in reshaped carbon fiber--the bottom half is based on the Aventador, while the top half is new--lets the front end act as an aero wing, channeling and shaping the airflow through the hood and even through the wheels to create better stability at the Veneno's highest reaches.

It's also effective in cutting weight by about 275 pounds, and in creating better air management under the car, where the Veneno adopts smoother underbody and an air diffuser and air splitter at the tail.

It's another step down the road to using carbon fiber as the lingua franca for all Lamborghinis, but while carbon fiber "is the material of the future," it's not the only one. More important, Reggiani points out, is the marriage of many different technologies, balancing performance and weight and strength against cost.

"What is important is to define the right technology, and to be able to combine in a hybrid way," he explains, citing the BMW i8 and other concept-to-production vehicles as the harbinger of a new era of mixed-material cars.

"More and more, everybody recognizes the potential of the carbon fiber--not the material, but that you can create only what is necessary, and where you do not [need it], nothing."

With the covers off the McLaren P1 last year in Paris, and hints dropped about LaFerrari for weeks, the debut of the Veneno came as more of a surprise, which pleased Reggiani.

"We were able to shock the audience this year," he says, with "a completely new interpretation of the message of Lamborghini, when we talk about the supersport of the brand."

Of the hypercars on display, it's also the one that's closest to production, with the display car a development prelude to three more cars to be built this year. It's limited production to the extreme--and the customers are extreme in their own way, each having bought their Veneno sight unseen.

"They didn't know what kind of car they'd buy," Reggiani says. "They only were told it is a trilogy, that it will be the most extreme Lamborghini ever built, a tribute to the 50 years of Lamborghini. Two of the customers came to the motorshow at 6:30 a.m. to see the car, because they never saw it before.

Each will get a distinctive car--the cars will have either a red, or white, or green stripe, a nod to the Italian flag. The order of choice? "This was based of the ranking when they book the car." Lamborghini's prototype will be the only car to bear the tricolore.

"We are probably the first ones to push in the direction of the one-off as a way to celebrate our design, our innovation," he says. "But we are proud to decide what is Lamborghini, and not let the customer decide what is the Lamborghini of the future.

"Only because you have money, does not decide what is Lamborghini. In the end, we are proud to make Lamborghini the owner of the DNA.

That leaves responsibility squarely in the hands of Sant'Agata, and as Reggiani admits, that can be its own mixed blessing.

"You don't know if its a success or its a flop. Last year it was more emotional, easier to create a wow. This year, it's more of a car."

He knew it would be well-received when Jackie Stewart stopped by. Stewart's reaction: "Wow, wow wow!"

Of course, the most important to impress may have been the boss--president and CEO of Lamborghini, Stephan Winkelmann. The race to complete the Veneno meant that from sketch to show car, only five or six months elapsed.

"A classic job, like if you race," Reggiani says.

Which might explain why the Geneva Motor Show was where Winkelmann first saw the completed car.

"We decide and we go, no discussion," Reggiani smiles. "He see some sketch, but he look for the first time the car here. We receive a target and run full speed toward it. No time to see the car, at the end is like a puzzle, in the last minutes you assemble everything."

"For him it was a surprise."

What was his response?

"Some word that is not possible to repeat," he grins.