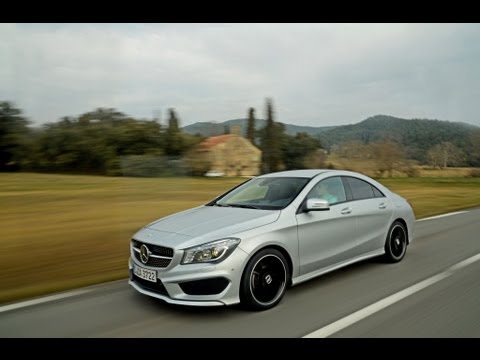 Geneva is a peaceful town, and the annual auto show marks a detente--usually--for the world's carmakers. McLarens park next to Bentleys and leave room to spare. Space is made for one-off tuner fantasies. Even rival execs rub shoulders and shake hands as they get a glimpse of the latest supercars and profit-makers alike.

It's all good, except when the gloves come off, as evidenced this year in the backhands lobbed between the Mercedes, BMW, and VW Group stands, kept at arm's length at the Geneva Palexpo.

The backstory: the battle for luxury car dominance is heated, with BMW ending 2012 at 1.86 million units worldwide. VW's Audi brand surged to 1.46 million units in global sales, while Mercedes-Benz parent Daimler finished the year at 1.42 million units. All are faced with a sluggish economy not just in Europe, but in the U.S. and even in China, the three biggest luxury-car markets in the world.

In the U.S., each brand ended last year on a high note, with the photo-finish between BMW and Mercedes setting the stage for some subtle Geneva digs. BMW sales surged December, surpassing Mercedes, which had led 11 months out of the year--but Mercedes says it saw more registrations, concluding that BMW had pressured dealers to acquire more vehicles without moving them on to retail customers.

"In the majority of markets, Mercedes continues to be perceived as the number-one luxury brand," said Daimler AG chairman Dieter Zetsche, who in an interview at this week's Geneva Motor Show indicated the year-end sales jockeying wasn't entirely unexpected.

"I told our guys over there definitely to stay course in December, not to do anything unusual," Zetsche said. "If substantially we pass the others or one other, that's great. If not, fine."

Zetsche, 59, who recently signed up for three more years as the company's chairman, was himself the source of some speculation at the show. The extension of his contract for three years, rather than the customary five years, had some rumoring discontent within the board of management over Mercedes' small-car strategy, while others noted that Zetsche is nearing retirement age, with a potential replacement in Wolfgang Bernhard waiting in the wings.

Zetsche has been chairman of Daimler since 2006, the final days of DaimlerChrysler. Bernhard served with Zetsche at DaimlerChrysler before returning to Germany, where recently he was appointed head of Daimler's truck division, switching roles with Andreas Renschler, who ran Mercedes' SUV plant in the U.S. and Smart before heading up its trucks division. Renschler will now take over Bernhard's role in purchasing, the company said in a release.

The tension between Germany's Big Three surfaced again at a pre-show event, when Mercedes' Dr. Thomas Weber indirectly compared its new SLS AMG Electric Drive to Audi's stillborn R8 e-tron, calling it "real Vorsprung durch Technik." The play on Audi's corporate slogan drew murmurs from the crowd of media and executives on hand for the global unveiling of the A45 AMG.

CLA: small is big around the world

Geneva hosted the worldwide debut of the 2014 Mercedes-Benz CLA, the first compact car from a new family that will be sold in the U.S. It's a critical car for Mercedes' global fortunes. While BMW and Audi have had success with smaller vehicles, Mercedes' Smart brand has struggled for relevance and product. It's almost the opposite case in the U.S., however. BMW's 1-Series cars have been overshadowed by the 3-Series and MINI. Audi's A3 hatchback lacks a sedan counterpart, though one is due to arrive next year. The CLA will be on sale in a matter of months, while BMW will have its attention occupied with the global launch of its i3 green car, and Audi, with its new intra-corporate rivals for attention at Porsche.


Zetsche sees the 2014 CLA as a major opportunity for Mercedes to expand sales around the world, and to draw in new and young buyers, in a way the automaker hasn't been able to since the original C-Class.

It is "necessary and possible to position, specifically in the U.S., these products in a segment where Mercedes becomes affordable for more customers than ever before," he says.

At the same time, Zetsche acknowledges that the CLA and other coming compact vehicles blur the line between Mercedes' longtime luxury-brand position with the grey area of "premium." In America, for example, the CLA will compete against the likes of the Buick Verano and Acura ILX.

It's "not black and white," Zetsche says, trying to identify the breakover point. It "probably will be difficult to have a scientific separation between premium and luxury."

And while it's aimed specifically at attracting younger buyers to the brand, it's fine if the CLA also brings along some of the current clientele.

"The more mature, young at heart customers of ours...they're good to us, they're affluent, they're the best customers you can have," Zetsche says. "Obviously their numbers are limited. That's why its important, if you want to grow, that you go to other segments as well."

Zetsche says the company only has some hints that the strategy could work--and could expand Mercedes' reach to the audiences BMW and Audi now serve. In Europe, the compact car lineup, including the A-Class and B-Class, has an average age 10 years younger than other Mercedes products. In the U.S., he adds, "we see reactions to the blogs, to the ads since the Super Bowl...All the signs so far are very promising."

No matter to whom the CLA sells, it's designed to make a profit, Zetsche confirms.

"We are not a welfare organization," he says, noting that the compact-car family of vehicles share more than 70 percent of their structure and parts, in an effort to manage costs and complexity.

More at the top: a new S-Class, too

The new CLA arrives just as an expansion at the top of its lineup will bring a new Mercedes-Benz S-Class, to be shown in May. This new family of cars will include six different vehicles, including a new vehicle effectively replacing the Maybach, and likely approaching the $200,000 to $250,000 price point.

"We will broaden the portfolio with the S-Class, and take some of these family members more upscale to reflect at least the segment which is in between the Maybach and the top end of the S-Class," Zetsche explains, citing the Rolls-Royce Ghost as a specific competitor for the new vehicle.

"We think we have a stronger foundation to go there with Mercedes, with the Mercedes dealer body and so on….to further strengthen and balance the brand just when we are going with these compact cars."

At the same time, Daimler will also add more compact cars, including a four-seat vehicle for Smart and a crossover based on the new CLA. There's also a coupe-like SUV to come from the M-Class family, from the Mercedes plant in Tuscaloosa, Alabama. Over the longer term--by the end of the decade--Mercedes will add 13 vehicles it does not sell today, vehicles without a predecessor.

In the near future, Zetsche is content to manage sales conservatively, banking on future new vehicles to bring Mercedes sales up to the same level as the reputation the company enjoys around the world.

"In the long run and based on substance, I think it's important that we strive for this number one position," he finishes. "In the sense of games and short term...we are not participating in these type of games."