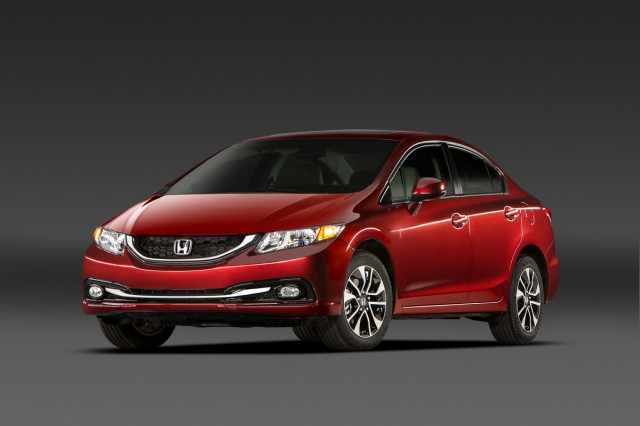 If you're shopping for a small, economical car and care about safety, we have a new winner: the 2013 Honda Civic.

The 2013 Honda Civic (both in Coupe and Sedan form) has become the first compact car to earn the Insurance Institute for Highway Safety (IIHS) Top Safety Pick Plus (TSP+) designation—the newest, top-tier designation from the insurance-industry funded group.

That means that the Civic now gets top 'good' ratings from the IIHS in frontal and side impact tests, the rear seat-based impact test, and the roof-strength test—as well as the latest small overlap frontal impact test.

First introduced for consumers this past summer, the small overlap test measures forces (on a crash-test dummy) and cabin intrusion when the corner of the vehicle (25 percent of the front end) impacts a rigid barrier at 40 mph. In the real world, it simulates one of the most deadly or injurious accidents—when the corner of the vehicle impacts either another car or a utility pole.

Honda points to its second-generation ACE body structure—so called ACE II—for the excellent protection. And going from the 2012 model to the 2013 model, the Civic got some important ACE II structural changes that coordinated well with the new tests. Which is a bit surprising, considering that the Civic had been redesigned for 2012.

“Since the Civic had a minor model change for the '13 model, we took that opportunity to make some changes to the structure,” explained Chuck Thomas, Honda's chief engineer in charge of collision safety.

Specifically, the 2013 Civic gets some higher-strength materials to reinforce the cabin space, along with some additional components in the structure and the engine compartment that are together more effective in absorbing energy in this kind of crash. 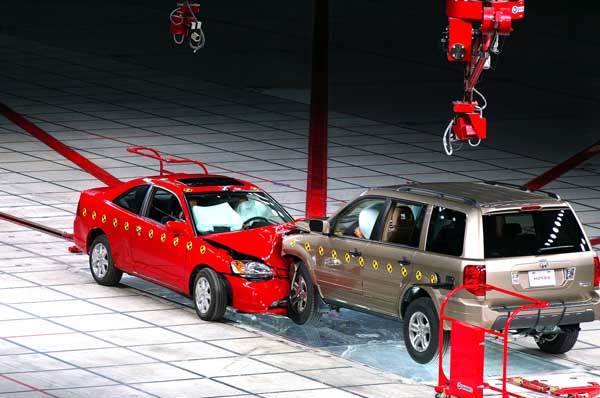 The original ACE structure was designed in the mid-2000s and focused around the issue of compatibility between different vehicle sizes. Honda designs its smaller vehicles with a stronger structure up high, while with the larger vehicles the stronger structures are down low, with the aim of engaging the structure in differing sizes of vehicles. With the ACE II improvements, where the main longitudinal members of the structure aren't engaged, you get secondary load paths to help absorb the impact energy.

“At the same time, since 2005, many of these materials have become available to us—things like hot-pressed steel, that has very high tensile strength—that weren't really that available in the early 2000s,” said Thomas.

What Honda sees in its own results, as well as those numbers from the IIHS, is “very little chance of a life-threatening injury” in the small overlap Civic results—admittedly a test that's performed under specific laboratory conditions.

“I do think that it's important to note that the changes that we've made to this vehicle, particularly as we've improved the structure to help maintain the integrity of the occupant space, helps in all types of real-world crashes,” asserted Thomas. “The changes that we're making in improving the door ring and the door structure helps in rolliover crashes, frontal crashes, and rollover crashes; it helps maintain and protect the space around the occupant.”

Although in recent years the IIHS Top Safety Pick list has included well over a hundred entries, the Top Safety Pick+ list looks like it will remain small for some time, and in the seven months since the first release of results some automakers—like Toyota, with its Camry ('poor' in the new test)—have been caught flat-footed.

The small-overlap improvements, while done under Honda's own engineering and research, were largely spearheaded by research published by the IIHS in 2009. Since then Honda has been following IIHS research in this area and working in parallel to understand how it can structurally improve its vehicles in this type of crash.

The ACE II improvements altogether add about 26 pounds to the body structure, and they apply to the entire family, including Hybrid and Si models.

The accolade now brings Honda's number of Top Safety Pick+ cars to five: the Accord Coupe, Accord Sedan, Civic Coupe, Civic Sedan, and Acura TL. At this point, all the Honda models that have been tested to the new standard have achieved the top rating, while a long list of models (the Honda Fit, Crosstour, CR-Z, CR-V, Insight, Pilot, Odyssey, and Ridgeline; and the Acura ILX, TSX, MDX, and RDX.