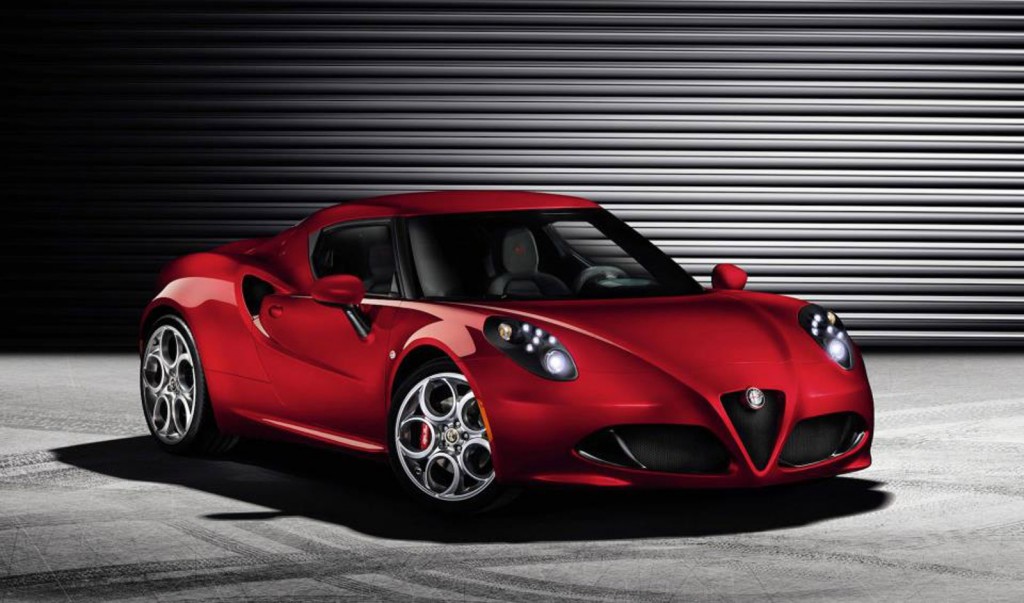 When Fiat joined forces with Chrysler in 2009, the marriage spawned rumors that Alfa Romeo would soon return to the U.S. Chrysler/Fiat CEO Sergio Marchionne has done plenty to encourage those rumors, though he's said that Alfas would only arrive when the time was right.

Apparently, the time is now right: the company has issued a press release about the new 2014 Alfa Romeo 4C, which will lead the company's assault on American shores after debuting next month at the 2013 Geneva Auto Show.

Unfortunately, that press release doesn't offer too many details about the production version of the mid-engined 4C, which was shown in concept form in Geneva two years ago. However, it does note that the car will arrive with the same direct-injection, four-cylinder engine found in the Quadrifoglio Verde version of the Alfa Romeo Giulietta. That engine comes with a turbocharger, as well as "a revolutionary scavenging control system that gets rid of any turbo lag".

The engine will be matched with an automatic dual-clutch transmission that offers four driving modes. Three of those we've seen before -- Dynamic, Natural, and All Weather – but the fourth -- Race -- is new, designed to thrill owners at track days. As you might expect, the 4C is rear-wheel drive.

And that's about all we know for certain at this point. However, our colleagues at Motor Authority remind us that previous estimates rated the 4C between 230 and 250 hp, with a 0-to-60 time of around 4.5 seconds.

We were skeptical when Fiat introduced the 500 to America. It's a very small ride with a European feel, neither of which are big selling points with U.S. drivers.

And frankly, the car's debut didn't go very smoothly. On the distribution front, Fiat insisted that interested dealers build special showrooms for the 500 rather than simply dropping them alongside Chryslers, Dodges, and Jeeps. That left a gap between the debut of the 500 in the press and its arrival in showrooms, since those showrooms had to be constructed. In the interim, enthusiasm flagged.

We weren't exactly bowled over by the Fiat 500's marketing, either. For the first several months, things were so quiet, it seemed as if Fiat was waging a stealth campaign. Finally, Jennifer Lopez lit the fuse, and since then, interest -- and sales -- have picked up.

The Alfa Romeo 4C, however, is a completely different animal. The biggest difference is that it's a sportscar -- in fact, the press release describes it as as supercar. With just two seats and loads of power, the 4C isn't meant to be practical like the Fiat 500. It's far more of a weekend car.

Although Alfa Romeo hasn't announced pricing for the 4C, we don't expect the sticker to be especially practical, either. It doesn't offer the power of potential competitors like the Porsche 911, the Audi R8, or even its cousin by marriage, the Dodge Viper, so it should remain safely in five-figure territory. Original estimates placed it around $45,000, but that sum could creep higher, since production is limited to around 2,500, with just 1,000 slated for North America.

In other words, the 4C won't be a volume-seller. It's a halo car, meant to turn heads and set an image for the Alfa Romeo brand, not necessarily open American wallets. As a result, Alfa won't need to move many 4Cs to make it worth the company's while.

Our only real question is how the company plans to sell it. Given the limited numbers, Marchionne surely won't require that dealers build special showrooms for the 4C. It could sell alongside the Fiat 500, though the two seem a mismatched pair.

More likely, the Alfa Romeo 4C will appear at Maserati dealerships -- which wouldn't be surprising, since the 4C will be built at the Maserati plant in Modena, Italy.

We'll have more on the 4C in March, during the 2013 Geneva Auto Show. In the meantime, you can find additional details at Motor Authority.