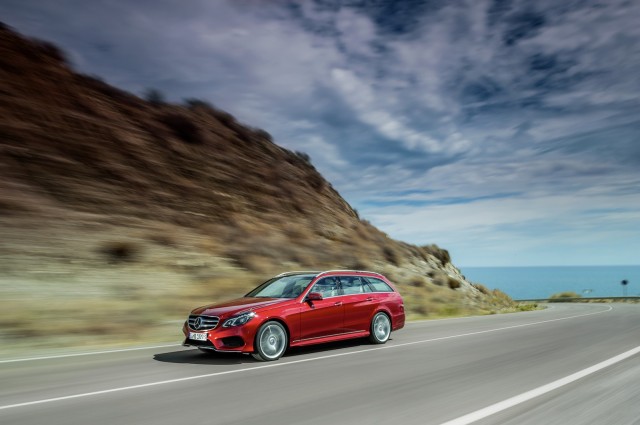 When the 2014 Mercedes E-Class sedan gets its smoother, less worried front end for the new model year, it won't be only a facelift. It'll also mark the midway point in a complete overhaul of the E-Class' powertrain lineup that began back in 2012.

Over the next two years, new four-cylinder turbodiesel and twin-turbo six-cylinder engines will take over for today's turbodiesel six and normally aspirated gas V-8 engines, as Mercedes ratchets up the fuel economy of its U.S. lineup, one piece of the puzzle at a time.

The process started in the 2012 model year, when the E-Class adopted a new direct-injection version of its standard 3.5-liter V-6, and when twin-turbo V-8s replaced the normally-aspirated V-8 in the E550 and the 6.2-liter V-8 in the AMG editions.

Now, it's the diesel's time to change--and it's getting downsized. For the 2014 model year, the E350 BlueTEC is being displaced by the new E250 BlueTEC, switching from six cylinders for four. The new powerplant is rated at 195 horsepower and 369 pound-feet of torque. Compared to today's BlueTEC E-Class, that's a slight drop from 210 hp and 400 lb-ft of torque, but the turbodiesel E-Class is still promised to reach 60 mph in about 7.4 seconds.

Here in the States, the E250 BlueTEC will be the entry-level E-Class in the U.S., in rear-drive form; a 4MATIC all-wheel-drive edition will be available.

Even after the diesel swap happens this model year, the raft of changes under the E-Class' hood won't be complete. For the 2015 model year, the V-8 engine will be dropped from the non-AMG E-Class sedan. In its place, a twin-turbocharged, 3.0-liter version of the 3.5-liter V-6 will be introduced. It makes 333 hp and 354 lb-ft of torque in European spec--so a U.S. output of about 328 hp is likely. A 0-60 mph time of under 5.3 seconds is the estimate from Mercedes.

The twin-turbo will be the most powerful non-AMG E-Class sedan available once the switch is made. The current plan is to offer it rear- and all-wheel-drive form. It will be priced above the existing V-6, but hasn't been said if it will directly replace the V-8 model in pricing, since it's still more than 18 months from an on-sale date.

The E-Class coupes, meanwhile, will continue to offer the V-8, but will also get the biturbo six as a new powertrain choice.

Fuel economy is the driving force behind the changes, according to Mercedes. Along with the more efficient diesel--a 35-mpg highway rating could be within reach--and the new hybrid model, the E-Class' overall fuel economy average is improving in other ways. Electromechanical steering is now standard across the E-Class lineup, as are seven-speed automatics and direct injection.

Meanwhile, the E63 AMG continues to drag lightly on the fuel-economy numbers, in its inimitable way. All-wheel drive will be standard on the performance models this year, and while sedans will come standard with an uprated 550-hp twin-turbo V-8, all wagons will come with the sedan's optional "S" higher output of 577 hp.  Stop/start is standard, at least.


The 2014 Mercedes-Benz E-Class sedan and wagon go on sale in May; the new turbodiesel will be available in July, while the AMG versions will arrive in August.