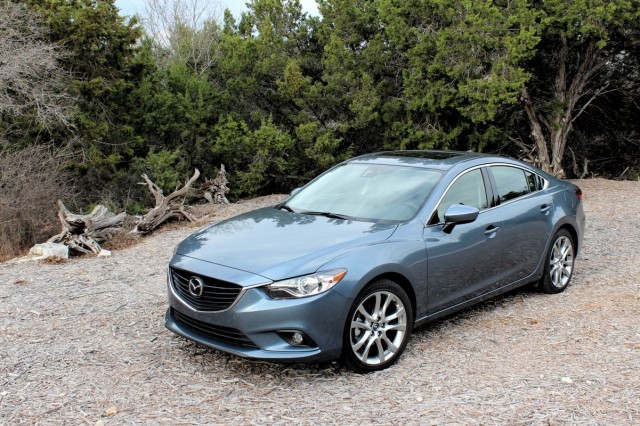 Among affordable, even frugal, mid-size sedans, the all-new 2014 Mazda 6 is about the closest we’ve ever come to love at first sight.

We thought the new 2013 Ford Fusion, this model year’s The Car Connection Best Car To Buy, was hot; but the Mazda6 doesn’t have an even vaguely awkward angle on the outside.

In full admission, we had high expectations for the way the new Mazda 6 would drive. Based on our experience with the previous Mazda 6—already what we considered the best-driving model in the segment—and what we’d sampled of Mazda’s new SkyActiv strategy in the CX-5 and in the Mazda3 (powertrain), it's exciting. Mazda has shown that it's in tune with what enthusiasts want—especially those who don't want to guzzle gas.

After spending most of a day out on the irregular roads of Texas Hill Country near Austin, we can say that the new 6 provides a driving experience that is definitely all that—along with way more interior comfort than we expected, as well as impressive refinement and an excellent feature set. The only significant disappointments all reside in the instrument panel's center stack.

Mazda had been developing vehicles—and engines—together with Ford, but as the result of a messy divorce agreement it’s now essentially on its own. Instead of partnering up with a different major automaker, Mazda opted to ‘go it alone,’ and in 2008 kicked off its SkyActiv program—an initiative for vehicle development. While it was a tough road for a relatively small automaker like Mazda to take, it resulted in a from-scratch look, from the ground up—including new fuel-saving engines and transmissions, a new approach to chassis design and body structure, and a focus on weight savings while still preserving Mazda’s reputation as the maker of particularly fun-to-drive vehicles.

A rev-happy engine, and transmissions that do it justice

Together with the new CX-5, which was released less than a year ago, the Mazda6 is on an all-new platform, boasting these new engines and transmissions. In the Mazda 6, the only engine at launch is a 2.5-liter four, making 185 horsepower and 184 pound-feet of torque and fitted with direct injection and an awesome 13:1 compression ratio. This engine needs to rev more than the base fours in some other mid-size sedans to tap into its perky side, but the six-speed automatic is deft and always on its game, downshifting almost instantaneously when needed, smartly hitching revs down whenever they can be, and most of the time feeling a lot like the better dual-clutch units.

The six-speed manual is a star, too, snicking neatly from gear to gear, with short throws and neat clutch takeup. We only wish the automatic would stay in a manually selected gear at full throttle (if you’re zigzagging up a mountain pass, for instance, and don’t want to upset the car’s composure); instead it still downshifts the moment you hit the detent (a new German style one).

Unfortunately, as much as the 6 is trying to appeal to driving enthusiasts, you can only get the manual gearbox if you opt for one of the lower trim levels. Our pick of the lineup, that said, would be the better-equipped Touring model with the manual transmission.

In all, the Mazda6 is as quick as most gas-mileage-minded shoppers will ever want, although it doesn't exactly address the black hole left by the discontinuation of the scorching V-6 model—which had been one of our absolute favorite affordable 'sleeper' enthusiast sedans. That kind of torque and more will arrive to the Mazda6 lineup later in the model year—in diesel form, with about 170 hp and more than 300 pound-feet of torque, as well as an EPA highway rating of (likely) more than 40 mpg.

Considering the sportier 'zoom-zoom' ethos behind it, the Mazda 6 is far more comfortable than you might expect it to be. With well-bolstered sport seats throughout the model line—even in the base Sport—as well as a really nice (firm but absorbent) ride, this is a car that holds you in place on curvy roads and gives you plenty of support for long-haul Interstate slogs. The back-seat is comfortable, too, although the swoopy roofline limits headroom for those much over six feet tall.

Rewarding, but not edgy

That said, it might not be quite as sharp as you'd expect either. Mazda redesigned the suspension, as well as the pivot points in back, so as to allow more travel without upsetting the geometry—and while countering dive and squat. It's on the firm side for a mid-size sedan, but we wouldn't call it a sport sedan; this is a car that feels ideally tuned more for long, sweeping corners than for the unpredictably banked corners. Over irregular surfaces and tight corners, even right up against the limits, the quick-ratio steering stayed oddly stoic, despite the nice steering-wheel weighting that altogether delivered a sort of Cliffs Notes crib of what was happening at the tires.

Otherwise, the 2014 Mazda 6 offers a lot of features for the money--with the nearly fully loaded, active-safety-equipped Grand Touring we spend the most time with bottom-lining at about $31k. So it stands strong, mostly, when you're cross-shopping by value.

Mazda calls the instrument-panel layout ‘uncluttered,’ and we appreciate the clean look and admittedly simple layout; but Mazda struck out in many interface aspects—with climate controls and infotainment interfaces that neither match each other—for interface, tactility, and the like—nor the rest of the car. One of them is the climate controls, which despite knobs that are easy to grab quickly to change settings yet have a display that's covered with a lens that seems to gather reflections during daylight driving (closing the sunroof helped).

The other disappointment is audio and infotainment systems. The base system in the Sport is a blocky unit that doesn't quite fit in, while most other models get a touch screen system, combined with available TomTom navigation that also doesn't work well with the look of the rest of the car and doesn't function particularly well; even if you're not the type to opt up to MyFord Touch or have the latest smartphone, you may find it frustrating and sluggish. Although Pandora integration worked great with our iPhone5, satellite-radio information was laggy, maps took a long time to load and had poor detail, and the so-called Command Controller you get in top trims responds inconsistently to the various screen menus—feeling more than anything like an underdelivering BMW iDrive knockoff. It looks pretty good on the center console, but it doesn't function well. And sitting through the tutorial for the voice-command system, we learned that it’s structured with a system of tree-style commands; in this age of Siri, you can’t simply give it a natural-language command and expect results.

Infotainment aside, the rest of the materials throughout the cabin look and feel quite great, and in general, the Mazda 6 does a great job in pretending it's a little more upmarket than it is.

And as we pointed out, the driving experience is positively charming, and never bland. If you're ever down about a few of those other points, step out, take a look at the exterior, then speed off on your favorite backroad. Your relationship with this zoomy mid-size sedan will be rekindled.