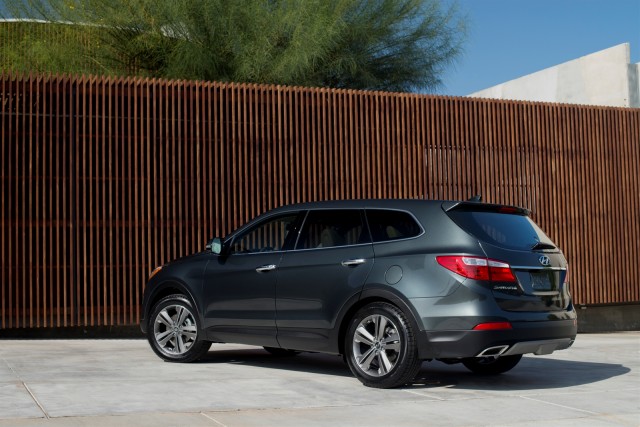 That also positions it at about $2,000 less than the base front-wheel-drive Chevrolet Traverse, or about $2,500 less than the Ford Flex. Compared to the Santa Fe Sport, the three-row model is 8.5 inches longer, with a wheelbase that's 3.9 inches longer. That said, it's priced quite a bit higher than the smaller Sport, which starts at just $25,295.

As we've outlined in our full review of the 2013 Santa Fe, as well as our First Drive of the Santa Fe, Hyundai has given the Santa Fe a new shape that adds a dash of ruggedness and practicality to its familiar 'fluidic sculpture' shapes, while inside it's much-upgraded the interior to be smooth, swoopy, and well detailed, yet a little more grown-up in look and feel than the smaller Tucson. All-new powertrains complete the package; while the three-row Santa Fe doesn't get the base four-cylinder engine or available turbo four that powers the Sport, a 280-horsepower, 3.3-liter direct-injection V-6 should provide plenty of pep—and enough sheer muscle to tow up to 5,000 pounds (a Tow Prep package is included on all models).

A Technology Package on the Limited adds a navigation system with six-inch touchscreen, as well as a 550-watt, 12-speaker Infinity Logic 7 surround sound audio system, a panoramic sunroof, heated steering wheel, and manual rear side sunshades.

Unlike the two-row Santa Fe Sport, the three-row Santa Fe will be built in South Korea; it begins reaching dealerships in late February.