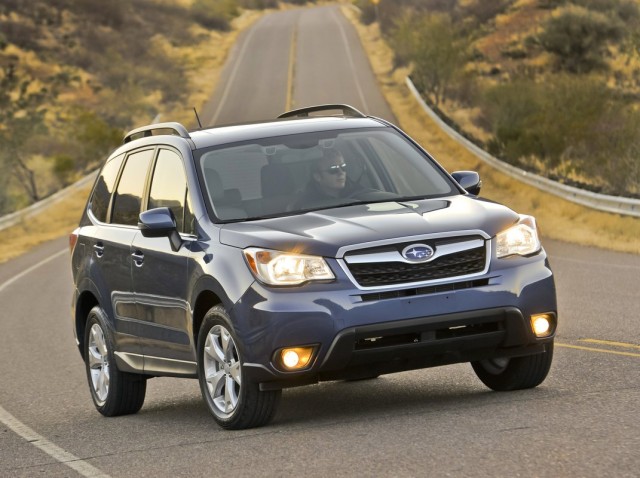 If the somewhat larger Forester that emerged for 2009 was Subaru's first grab at a wider group of American family shoppers, the latest all-new 2014 Forester is an official coming-out to the mainstream—and at last, a direct rival again to the likes of the RAV4 and CR-V, as well as the Ford Escape and others.

While we hope to put the Forester more thoroughly through the rigors of grocery runs and weekend errands sometime in the very near future—and see that it measures up with those models—we recently attended an official first-drive event that served to show us, essentially, that the new Forester hasn't compromised to broaden its appeal.

In a drive that took us on washboard-surfaced gravel backroads, out to track time, we found a top-of-the-line 2.0XT Touring not only more engaging to drive on paved roads than your typical compact crossover but also surprisingly well isolated from coarseness and roughness.

As we covered in a Preview Drive of the 2014 Forester back in November—in which we got a limited drive of a pre-production prototype on a closed circuit—this new model takes no big step ahead in performance, and it doesn't get substantially larger on the outside. Instead it goes for the heart of the compact crossover market with family-minded conveniences like a power liftgate, as well as, at the top of the model line, upscale conveniences such as adaptive cruise control and Harman Kardon audio.

The Forester remains far more rugged than just about any other vehicle in this class, with 8.7 inches of ground clearance and enviable approach and departure angles; and it aims to make tough off-road situations no sweat with a new off-road aid called X-Mode. And at the same time it's been made roomier inside, more refined, and more fuel-efficient.

Subaru also claims to have much-improved the Forester's level of interior refinement, and while we can see some serious improvement in the materials throughout, we still needed to test the Forester's comfort on real U.S. roads. While the new Forester is essentially the same size as the model it replaces, Subaru rethought its interior packaging and made some very meaningful changes. Outward visibility is much-improved, too, thanks to an A-pillar that's been moved a bit forward, with a small partition window added, and the side mirrors moved back.

The 2.0XT has a new direct-injection boxer four—essentially a turbocharged version of the one in the BRZ—and it makes a stout 250 horsepower and 258 pound-feet, while offering an EPA Combined rating of 25 mpg. Just as throughout the model line, there's an all-wheel drive system delivering power; but in between there's a new continuously variable automatic transmission (CVT). XT models come with paddle-shifters, though, and they come with a system called SI Drive. Click over to Sport and you get a more aggressive throttle tip-in plus higher revs for the CVT. Then engage Sport Sharp (S#) and something unusual happens: The CVT goes into a mode in which it pretends that it's an eight-speed automatic; click the paddle-shifters and you can ratchet through those gears as you please—and you'll probably want to, as even though the Forester doesn't accelerate any faster in this mode, it can bring you more of a feel of speed and control.

Once you're moving, seriously quick

Seriously quick is how we'd describe the 2.0XT—except from a standing start, where it was surprisingly sluggish up to about 10 mph. Otherwise, it's the full deal, with upgraded brakes and somewhat better body control yet it's able to soak up those washboard surfaces. Later, we spent several more hours in a 2.5i Premium model with the six-speed manual transmission. Although the shift linkage is a little long and imprecise, it still brings out the torquey character of the naturally aspirated engine; additionally, the mechanically (50/50) split version of Subaru's symmetrical all-wheel drive system is simply more engaging as soon as you're on a loose surface.

Subaru has also rejiggered interior space and redesigned seating; by pushing the instrument panel nearly five inches forward, making it a bit lower, and raising the seating slightly, it's brought quite a bit more space, as well as better visibility throughout. Much wider door openings in front make getting in and our much easier as well, and cargo space has been improved—with some versions getting one-touch seat folding. The only thing we'd like to see different, after spending a few hours in the Forester, is better front seats; the ones that are included for the entire lineup—including Turbos—are lacking in both side support and thigh support.

Otherwise, the top-of-the-line touch-screen navigation system and its companion sound system—while producing excellent sound—has a truly horrid menu system, requiring the distraction of finding small 'buttons' on the touch screen to select stations or tracks. On the other hand, for safety, a rear-vision camera is now standard for much of the lineup, as is Bluetooth hands-free calling and audio streaming; and the power liftgate here is one of the best-packaged and easiest to use—allowing you to simply use your arm if you want.

Will the carabiner set still be happy? We can't think why not, and while the Forester now fits in as a sensible, high-value offering, it still has the added rugged capability, standard all-wheel drive, and sheer practicality—all great reasons to also keep its esteem among weekend-warrior types, and those in the Snow Belt.

For more details, and the rest of the story, see our full review pages on the 2014 Subaru Forester.