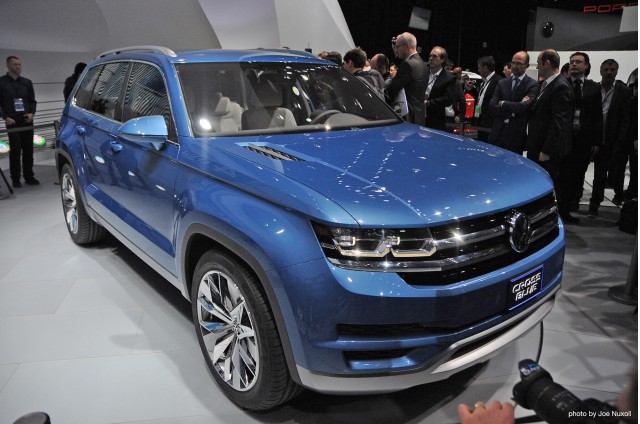 At the 2013 Detroit Auto Show, Volkswagen rolled out the CrossBlue Concept, a thinly disguised version of its new upcoming three-row crossover. Set to compete against the Toyota Highlander and Honda Pilot, this new family hauler will be built in the U.S., and will be designed specifically for American tastes.

The production version of the CrossBlue Concept will likely be built on the new Passat platform, and it'll feature a flexible interior layout with sliding second-row seats and fold-flat third row seats. The concept integrated Apple iPad Minis into the back of the front seat headrests, a terrific idea to keep those kids busy during a long road trip.

The CrossBlue Concept features a diesel plug-in hybrid powertrain, although the production model will most likely use a conventional gasoline engine, and a TDI engine might be a possible option. We also wouldn't be surprised to see a gasoline hybrid model at some point. The powertrain in this concept uses a 2.0-liter turbodiesel engine and a 40-kilowatt electric motor, which is sandwiched between the engine and the DSG dual-clutch transmission.

For more information on the Volkswagen CrossBlue Concept be sure to read our full preview here. You can also check out all the news from the 2013 Detroit Auto Show here.