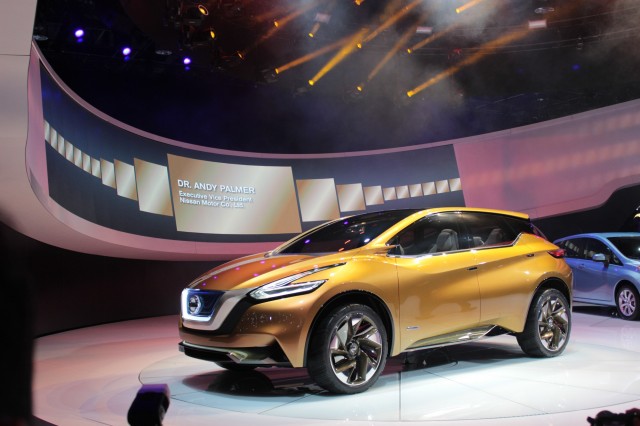 Nissan revealed the Resonance Concept at the 2013 Detroit Auto Show, giving us our best look at what the next-generation Murano crossover might look like.

Proving crossovers don't have to be bland, the Resonance Concept is inspired by the "Innovation Era," according to Nissan. The design puts an emphasis on aerodynamics with a look that implies it's lightweight, yet protective. That's marketing speak for a highly stylized vehicle.

Nissan's calling the design language "V-Motion." The grille sweeps upwards, while the windshield and A-pillars are steeply raked giving the impression the vehicle is in motion.

We really like the oversized 22-inch wheels with what appears to be carbon fiber accents, though we wouldn't count on wheels that large making it onto a production Murano from the factory.

The interior's futuristic as well with a floating instrument panel that features a holographic infotainment system.

The new hybrid powertrain is the most interesting bit as it's something we may actually see in the next-generation Murano. It consists of a 2.5-liter four-cylinder engine and a combination electric motor/generator linked to a CVT. Making it easier to package a battery pack, the battery is a laminated lithium-ion pack with intelligent charging control.

For more information on the Nissan Resonance Concept be sure to read our full preview here. You can also check out all the news from the 2013 Detroit Auto Show here.