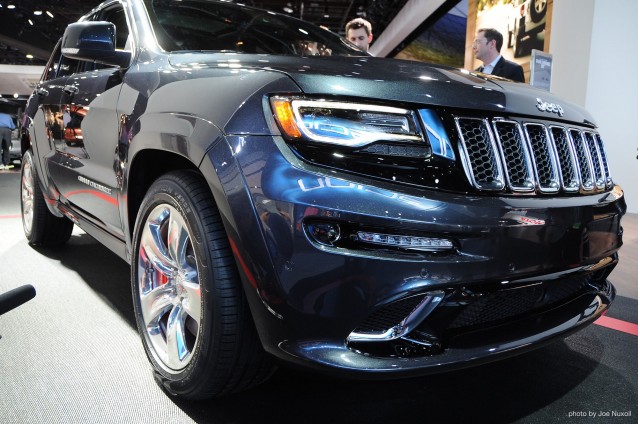 Its cabin is luxurious and well appointed but its ride can be harsh on broken pavement. It’s got a big fuel tank, but it needs it, since the big, 6.4-liter Hemi V-8 (which packs 470 horsepower and 465 pound-feet of torque) is a thirsty beast, even mated to the new eight-speed automatic transmission.

All that logic and common sense go out the window when you set your eyes on the 2014 Jeep Grand Cherokee SRT. It looks right, and it appeals to male buyers on an almost visceral level.

Climb behind the wheel and mash the fun-pedal, and any thoughts of practicality disappear like other traffic in the uber-SUV’s rear-view mirror. No one needs a Grand Cherokee SRT, but after driving it the only sensible question is what you’re willing to sacrifice to park one in your garage.

The 2014 Jeep Grand Cherokee SRT features refreshed styling, but big and bold are still the themes here. There are new LED daytime running lights, a new rear spoiler, a one-touch liftgate and a restyled grille that makes the SRT look even more menacing than its predecessor.

Thanks to the addition of the eight-speed automatic transmission, fuel economy improves over last year’s five-speed gearbox, and the Jeep can now tow up to 7,200 pounds. Cylinder deactivation turns the 6.4-liter V-8 into a 3.2-liter V-4 when power isn’t needed, but you still won’t rival lesser SUVs’ fuel efficiency.

The transmission can be shifted manually, and it operates independently of the Selec-Track stability system. On the Jeep SRT, the Selec-Track system includes Auto, Sport, Tow, Track and Snow modes, which should cover just about any driving condition your likely to experience behind the wheel.

For more details on the range of 2014 Jeep Grand Cherokee models, see our complete preview here.