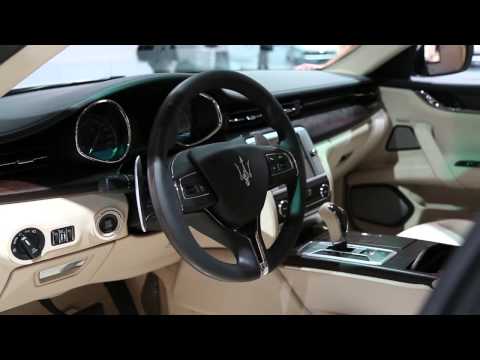 The 2013 Detroit Auto Show's press days are over, but the doors will soon open to the public. If you're in the market for a luxurious and stylish new four-door luxury car, you could do a lot worse than to check out the brand new 2014 Maserati Quattroporte.

With a fresh look that sticks close to the lines of the previous model while evolving the details into a more modern feel, the Maserati Quattroporte remains one of the most expressively-designed cars in the luxury sedan class. Inside, it's more of the same, with attention to detail and quality materials--including leather and wood--that communicate passion as well as luxury.

The 2014 model year sees the Quattroporte grow lighter, larger, and faster than before. The standard engine is a V-6, but a twin-turbocharged one, rated at 410 horsepower and 376 pound-feet of torque. That might sound like V-8 power, and it is, accelerating the large luxury car to 60 mph in just 4.9 seconds. If you feel the need for even more power, there's a twin-turbocharged V-8 to upgrade to, bringing with it 530 horsepower and 479 pound-feet of torque--as well as 4.7-second 0-60 mph times and a top speed of 191 mph.

Apart from performance that would have qualified it as a supercar a decade ago, and which still stands it in good stead with modern sports cars, the Quattroporte is much more than a performance sedan. The Maserati Touch Control infotainment center display also relays the feed from a backup camera, and provides access to an optional 15-speaker Bowers & Wilkins audio system. A WiFi hotspot and smartphone connectivity area also available.

Despite the solid tech feature set available, the Quattroporte looks much more the modern version of old-world luxury than the button-heavy or gloss-frenzied interiors of competing sedans. The idea, according to Maserati, is that less is more--and with handsome, simple, but well-detailed styling like that found in the 2014 Quattroporte, we tend to agree.