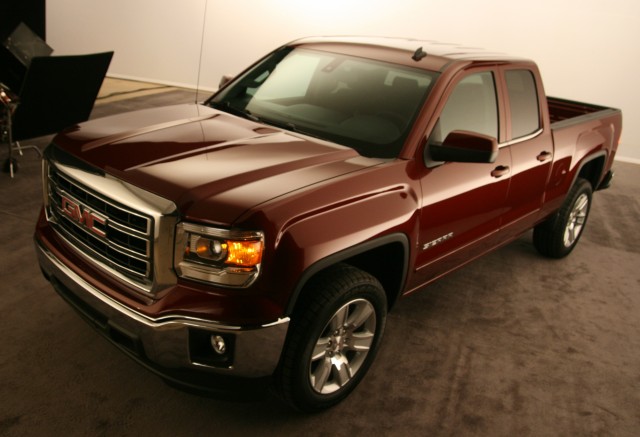 GMC has revealed the all-new 2014 Sierra 1500, which features more connectivity and utility than ever before, as well as a new look and updated powertrains.

Under the hood of the new 2014 Sierra you'll find one of three engines: the base engine is a completely new 4.3-liter V-6 based off of the latest V-8 engines. Both a 5.3-liter and 6.2-liter V-8 engine will also be available. All three of these engines feature direct injection, continuously variable valve timing, and cylinder deactivation technology. We'd tell you about power output and fuel economy ratings, but GM hasn't released any yet. But with six-speed automatic transmissions across the board, we'd expect to see some fuel economy gains over the previous generation trucks.

Design-wise much has changed, with a more upright front-end styling and flared fenders. The jewel-like headlights feature LED daytime running lights on some models, and the twin dome hood design from the current heavy duty trucks has been adopted for the new 1500.

Inside the new Sierra you'll find upgraded materials, better fit and finish, and new technology. GMC's IntelliLink will be available allowing Bluetooth connectivity, along with the ability to use apps such as Pandora streaming audio.

A notable change is made to the extended cab models, which now feature front-hinged doors which will make entry and exit a bit easier. The crew cab models now feature wider door openings.

We'll bring you more information once GMC releases powertrain outputs and fuel economy numbers. For now, be sure to read our full overview page here.