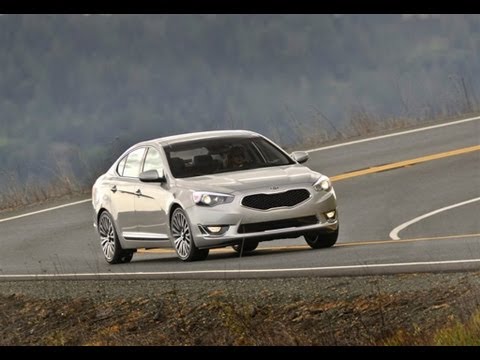 Perhaps inspired by Hyundai’s success in targeting the luxury sedan market, family-brand Kia has announced its first entry into the premium sedan segment. Revealed today at the Detroit Auto show, the 2014 Kia Cadenza is billed as the most technologically-advanced Kia ever offered in the U.S. market.

The Cadenza emphasizes style, too, sporting the latest evolution of Kia’s “Tiger Nose” front fascia, coupled with a long hood, steeply raked windshield and flowing roofline. Large wheels and a wide track are meant to give the Cadenza the look of a European sport sedan, without the associated price tag.

While the Cadenza’s styling may lure buyers into Kia showrooms, the car’s long list of standard features will likely be what closes the deal. Only one trim level will be offered, and standard equipment will include leather upholstery; wood and chrome trim; ambient lighting; an analog clock; navigation with SiriusXM Traffic and an Infinity audio system.

The Technology Package adds 19-inch alloy wheels; an electric parking brake; Advanced Smart Cruise Control (which not only maintains a set distance, but can  stop the car if necessary); Blind Spot Detection; Lane Departure Warning System and a water-repellent windshield.

Power comes from a 3.3-liter, gasoline direct injection V-6 engine coupled with a six-speed automatic transmission that includes a Sportmatic manual shift mode and paddle shifters. Engine output is rated at 293 horsepower and 255 pound-feet of torque, and the Cadenza will only be offered with front-wheel drive.

Kia is focused on occupant safety, too, and the Cadenza makes extensive use of High Tensile Steel to strengthen its body. This helps reduce noise, vibration and harshness (NVH) as well, and Kia further cuts NVH with a hydraulic transmission mount, a rear cross member damper and wheels designed to reduce wind noise at speed.

Last year’s Kia Optima SXL proved that Kia could sell near-premium automobiles, so the Cadenza seems to be the next logical step for the Korean automaker. As a flagship for the brand, the Cadenza offers up an admirable blend of styling and content, but its selling price may ultimately determine its success.

Kia promises pricing on the 2014 Cadenza sedan closer to its on-sale date, expected to be in the second quarter of 2013.

We'll have more on the 2014 Kia Cadenza, including live photos from today's reveal. Stay with us as we cover the 2013 Detroit Auto Show, live from Cobo Center--follow our show pages on The Car Connection, Motor Authority, and Green Car Reports, and follow us on Twitter @CarConnection @MotorAuthority @GreenCarReports .