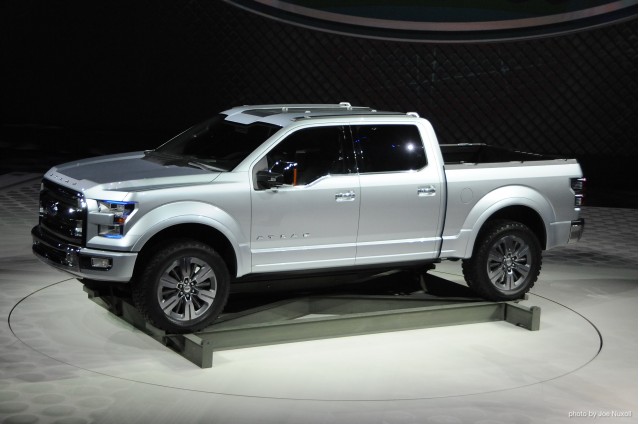 The 2013 Detroit Auto Show has already seen the world debut of the 2014 Chevy Silverado and the 2014 GMC Sierra--and to keep itself in the headlines along with its arch-rival, Ford will show a new Atlas truck concept that could predict a new pickup truck to come in the near future.

The Atlas concept is all about the future of Ford's big pickup trucks--how they'll look, and how they'll improve fuel economy. Atlas is the mythological figure that has the strength to carry the world on his shoulders, and Ford says that's how the people who'd drive one see themselves.

To fit that role, the Atlas has conveniences built into the cargo bed. A fold-out step can double as a cargo retainer, for example. In the same way the flip-out bed extenders on vehicles like the Ford Explorer Sport Trac have done in the past, the step slides and rotates upward to lock in place, forming a loading surface atop the vehicle. The roof is made tougher for that reason, to hold equipment like ladders.

A few touches come from commercial vehicles. The Atlas' cargo ramps are tucked away under the tailgate, like those on moving trucks. They're meant to be useful for weekend fun, too--for rolling an ATV into the pickup bed.

Other features fitted to the concept include active aero shutters for the grille and wheels, and deployable air dam and running boards, all to smooth out the truck's profile and to net 2 mpg in fuel economy as a result, Ford says. The Atlas also has a 360-degree camera system with guidelines to assist in trailer hitching, as well as LED exterior lighting.

The Atlas suggests that Ford is at least considering a commercial-duty pickup truck derived from its upcoming Transit van. The Transit goes on sale next year, and will eventually replace the E-Series full-size vans after production is up to speed in Kansas City. The Wall Street Journalhas reported that the Ford F-150 will turn to intensive aluminum construction to reduce weight and boost fuel economy; if that version could appeal to more upscale truck users, a Transit-based truck like the Atlas could be paired with the F-150 in the truck lineup, as a more utilitarian alternative.

Why have two truck lines? The commercial models could boost Ford's truck fuel economy by making use of EcoBoost turbocharged engines with stop/start, or diesel engines, while making a better financial case for building the Transit in the U.S.

We'll have more on the Atlas concept, including live photos from today's press conference. Stay with us as we cover the 2013 Detroit Auto Show, live from Cobo Center--follow our show pages on The Car Connection, Motor Authority, and Green Car Reports, and follow us on Twitter @CarConnection @MotorAuthority @GreenCarReports .