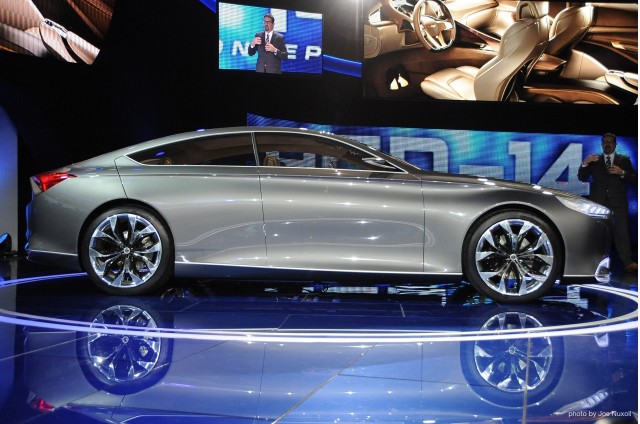 Updated with live images from the global unveiling at the 2013 Detroit Auto Show.

Hyundai has become a force in the mainstream car market that few would have predicted a decade a go. Despite some issues with gas mileage ratings, the brand appears to be headed nowhere but up. In the premium segment, the Genesis and Equus have also been making significant inroads, with the company claiming a 9 percent market share in their respective segments. The HCD-14 Genesis Concept car revealed today at the 2013 Detroit Auto Show previews where Hyundai is headed in the near future of its premium offerings.

Styled as a four-door coupe, the HCD-14 Genesis presents clean, smooth surfaces and crisp lines, molding into the increasingly popular coupe/sedan shape without looking overtly derivative. It's the latest interpretation of Hyundai's theme, which it's calling a "fluidic-precision, liquid-metal design language." A relatively rearward-set cabin and very short rear deck emphasize the car's coupe-like nature, as well as is sporing intentions.

The HCD-14 Genesis is still a concept car, however, so it needs at least a few concept-specific design elements. The most notable is the rear-hinged rear door setup, which allows unhindered access to the cabin with both front and rear doors open. This feature is unlikely to make it to production, however, if only due to side-impact crash protection considerations.

Inside, the center console features a "double-cresting-wave" design, carrying from the instrument panel in the front through to the rear seats. The wave theme is echoed in the door handles and rear headrests. In front of the driver, the instrument panel offers a mix of both digital and analog displays, set in an asymmetrical driver-focused layout. The center console includes an iPad storage station, to hold your tablet in place during "spirited driving."

Hyundai says the HCD-14 Genesis is built around the idea of driving dynamics and a driver-centric experience. While part of that experience is improving handling and sportiness, part of it is about reducing driver distractions, thereby increasing safety, through high technology. 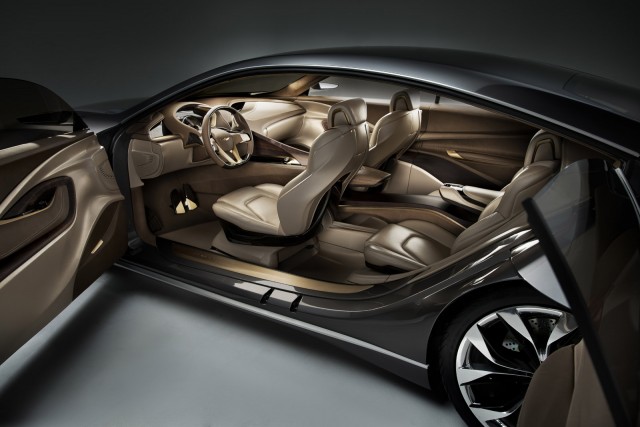 An eye-tracking system combines with 3D interactive gesture technology and a head-up display (HUD) to help keep the driver's eyes on the road. A yaw-control system (with driver-selectable modes) helps improve vehicle stability while allowing for more spirited drives. A stiff chassis and lightweight suspension and wheel components help improve ride quality and comfort while also delivering a better balance to the driver--with the feel communicated through a new multi-mode electronic power steering system.

Hyundai hasn't yet indicated just how much of the HCD-14 Genesis Concept's technology and design preview will make it into the next round of premium products, but if we were to place bets, we'd put our money on "most of it."

For more information and live photos of the Hyundai HCD-14 Genesis Concept and much more at the 2013 Detroit Auto Show, head over to our sister site, Motor Authority.