Connect with our dealer and finance partners through our site and ask for details regarding their at-home car buying services.
OK
HomeNewsManufacturing

Honda Accord Hybrid, Nissan Murano To Be Built In U.S. 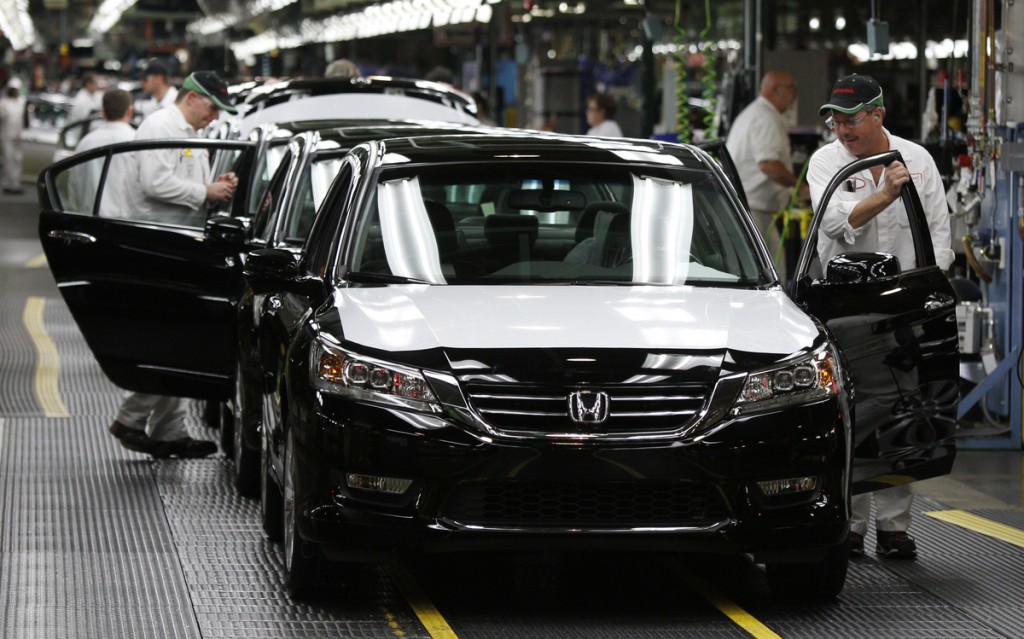 2013 Honda Accords on the assembly line in Marysville, Ohio, where they've been built for 30 years

Years after some analysts proclaimed that U.S. manufacturing was dead as a doornail, we're seeing new life in the sector. Not only are tech companies like Apple doing more of their making here at home, but automakers  are making the shift, too -- especially those from Japan.

Yesterday, our colleagues at Green Car Reports noted that Honda will move production of the 2014 Accord Hybrid from Sayama, Japan to Marysville, Ohio. In doing so, the company will invest some $23 million in the upgrades to the Marysville plant and hire an additional 50 workers. Honda workers in Marysville and elsewhere in Ohio already manufacture the conventional Accord, the CR-V, and the Crosstour, as well as the Acura RDX and TL.

Now, Nissan has made a similar announcement. According to a press release, the next-generation Nissan Murano crossover will be built in Canton, Mississippi, rather than Kyushu, Japan. Though Nissan hasn't releases specifics about the process, the company does say that adding the Murano to Canton's production schedule will "require several hundred employees".

The Murano will join a growing lineup of vehicles produced in Canton, including the Nissan Altima, Armada, Frontier, Titan, and Xterra. And just a few hundred miles to the north, Nissan workers in Smyrna, Tennessee have begun manufacturing the Nissan Leaf.

Why the shift? As you might expect, it comes down to economics.

While there's something to be said for consolidating production near a home-base, for large companies that export to international markets, it often makes sense to manufacture products closer to the point of consumption. This is one of the factors influencing Jeep to consider re-opening facilities in China: when demand reaches a certain level, manufacturing and exporting large quantities of products becomes a losing game.

The financial picture is even more complicated for Japanese automakers because of the strong yen, which makes production in Japan an expensive proposition. In fact, so much of Honda's manufacturing has moved stateside that by 2015, Honda could be as "American" as Detroit automakers by 2015.

Will other Japanese automakers boost production in North America? We wouldn't be surprised. We'll keep you posted.