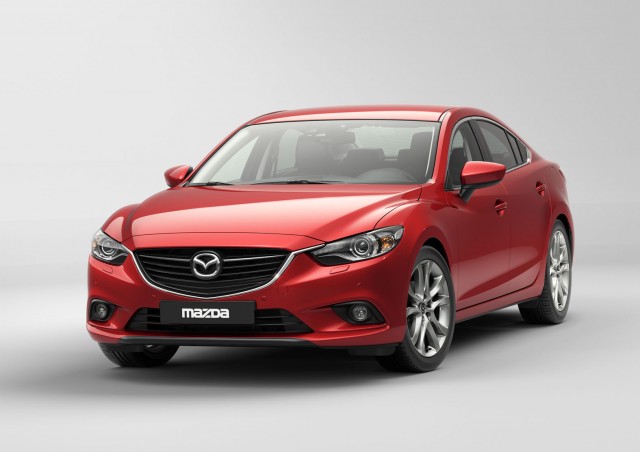 The 2014 Mazda Mazda6 has been sitting at dealerships for a couple of weeks now, but unfortunately, it's only been for show. (You haven't even been able to test drive it.)

Now that we've crossed the border into the new year, though, the 2014 model is fair game. EPA rules prevented Mazda from revealing pricing or fuel economy stats until this week, and yesterday, the company did just that.

According to a press release, the fully reworked Mazda6 currently comes with one engine option: Mazda's 2.5-liter SkyActiv four-cylinder, which boasts 184 hp and 185 ft-lbs of torque. In the second half of 2013, Mazda says that it will add a 2.2-liter clean diesel engine option.

The i Sport has a starting price of $20,880 and comes standard with manual transmission, push-button start, power windows, audio controls mounted to the steering wheel, USB ports, and 17-inch alloy wheels. With the automatic transmission upgrade ($22,495), drivers also get Bluetooth, a 5.8-inch color touch display on the center stack, a rearview camera, HD radio, and an infotainment system that can read and send text messages and respond to voice commands.

In the middle, we find the i Touring trim, which starts at $24,495. The manual transmission version doesn't seem to offer much more than the i Sport manual, apart from 19-inch wheels. But with an upgrade to automatic transmission, drivers get all the benefits of the i Sport automatic, plus leatherette seats and better climate control. With the $2,000 Touring Technology Package add-on, drivers enjoy TomTom navigation, a Bose audio system, keyless entry, rain-sensing windshield wipers, and Mazda's brake-assist safety feature, which can automatically activate the car's brakes when it senses a front-end collision while traveling below 19 miles per hour.

At the top of the range, there's the i Grand Touring, which starts at $29,495. It comes with all the features offered on the i Touring -- including the Touring Technology Package -- as well as platinum silver 19-inch alloy wheels, a power moonroof, high-intensity headlights with auto leveling, paddle shifters, and a four-month complimentary subscription to SiriusXM Radio. Two safety upgrades are also available: one offers adaptive cruise control and a forward obstruction warning system for $900, while the second offers both of those features plus lane-departure warning and i-ELOOP, which powers the Mazda6's electronic components via a brake energy regeneration system, improving the car's fuel economy. Pricing for the latter upgrade will be available in the second half of 2013.

For more on the 2014 Mazda Mazda6, check out our sneak preview, complete with video from the floor of the LA Auto Show.