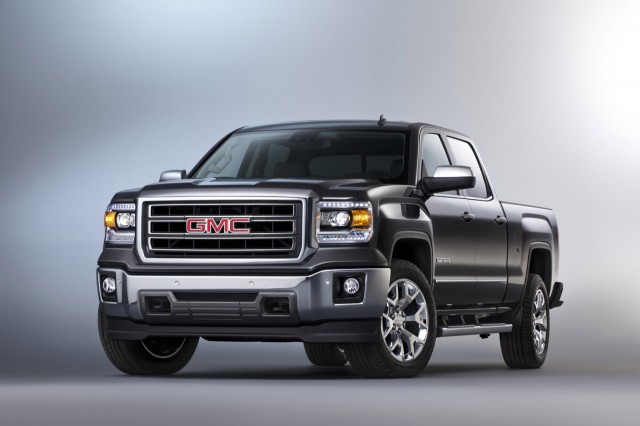 General Motors [NYSE: GM] has revealed significantly revised versions of its full-size pickups, the 2014 GMC Sierra and 2014 Chevrolet Silverado, and while they make major advances in cabin appointments, safety, connectivity, and even cargo-bed convenience, one of the biggest pieces of news is that with these trucks comes an all-new family of V-6 and V-8 engines designed to be both stronger and more fuel-efficient than those in the current trucks.

All three engines are a pushrod design (GM boasts of the packaging advantage these ‘small block’ engines usually have versus overhead-cam designs), but they have aluminum blocks and heads and incorporate direct injection, as well as cylinder deactivation and continuously variable engine timing.

GM says that the engines are completely new, and they “share only a handful of parts with previous Chevrolet and GMC engines.” The automaker calls them “the most technologically advanced engines ever offered in light-duty pickups.”

The new EcoTec3 family includes a new 90-degree 4.3-liter V-6, that’s closely related to the V-8s and to be produced on the same line, so unrelated to the previous V-6 of the same size. Additionally, there are 5.3-liter and 6.2-liter V-8 engines. Power and torque numbers haven’t yet been released, but GM promises significant efficiency improvements and low operating costs, and that the V-6 will have enough torque for towing and hauling, even when installed in the larger 2014 Chevy Silverado and 2014 GMC Sierra Crew Cab models.

The cylinder activation (also called Active Fuel Management) is one of the key technologies allowing these engines to provide full power when towing, hauling, or getting through tough terrain—and to give them the overall ruggedness necessary, the automaker notes—while allowing efficiency improvements in light-duty conditions like cruising or coasting. It uses oil pressure, with electronic controls, to deactivate the lifters for four of the cylinders in the V-8s or two of them in the V-6—running either engine as a V-4 under those conditions, and able to switch in less than 20 milliseconds.

These new engines are pushed to a higher compression ratio of 11.0 to 1, for efficiency, but all of them are designed to run on regular fuel. Intake and exhaust positions have been switched around from previous engines, and the valves are no longer centers, but rather canted toward the cylinder centerline; the piston heads have also been recontoured for the direct-injection system’s spray pattern, and the igniter has been located closer to the cylinder’s center.

All three of these engines have increased oil capacity (six quarts for the V-6, eight quarts for the V-8s), and the V-8s move to new 0W/20 motor oil. Oil-jet piston cooling, tough cast-iron exhaust manifolds, and a new PCV-integrated rocker-cover design all help with durability and refinement.

Other improvements include a revised cooling system with an offset water pump and thermostat; an induction-air humidity sensor; an engine-driven mechanical vacuum pump (for braking); individual ignition coil modules with iridium-tip spark plugs; and a new engine controller.

The new EcoTec3 engines will be produced at Tonawanda, New York, and GM says that it “will create or retain more than 1,600 jobs in five North American plants.”