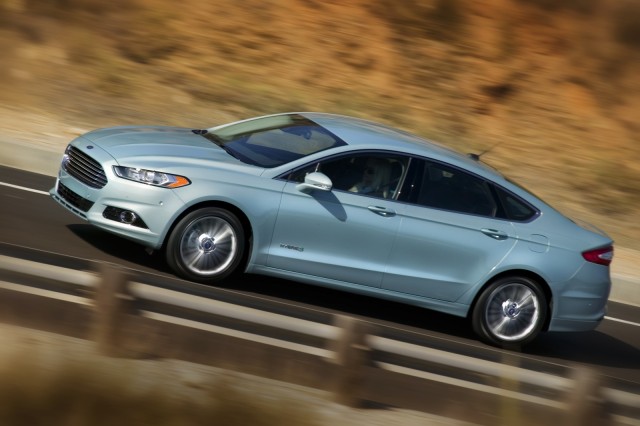 Two weeks ago, we mentioned that the Hyundai/Kia fuel-economy fiasco was turning heads in Congress and suggested that this could cause the Environmental Protection Agency to take a closer look at other vehicles.

According to AutoNews, the EPA will review complaints about the 2013 Ford Fusion Hybrid and 2013 Ford C-Max hybrid, both of which are advertised as earning a combined fuel economy of 47 mpg.

As our colleagues at Green Car Reports noted, auto critics and consumers began contesting the C-Max's fuel economy claims some time ago. In test drives, GCR averaged around 40 mpg, which is roughly what C-Max owners have received over longer periods of driving.

Shortly thereafter, numbers for the 2013 Ford Fusion Hybrid began rolling in, and they were even lower -- generally in the range of 35 - 37 mpg.

Perhaps the most vocal criticism of the C-Max and Fusion Hybrid came from Consumer Reports, which drove each vehicle for thousands of miles on test tracks and public roads. In the end, the magazine rated the Fusion Hybrid at 39 mpg and the C-Max at 37 mpg, placing the latter a full 10 mpg below its advertised fuel economy.

In light of such complaints, the EPA will now audit the vehicles' fuel-efficiency claims for itself.

A repeat of the Hyundai/Kia controversy?

Will Ford suffer the same rough fate as Hyundai and Kia? Maybe, maybe not.

Last week, the EPA's Linc Wehrly told AutoNews that fuel economy in hybrids is apt to vary widely -- far more so than in conventional, combustion-engined vehicles. That's because of variables in hybrid systems: the distance a vehicle can travel in electric or assisted mode is subject to fluctuation, and that, in turn, can have an exponential effect on gas consumption.

Wehrly's statements are backed up by Consumer Reports. Prior to the C-Max and Fusion Hybrid tests, the magazine found its biggest fuel-economy discrepancies on Prius models, which fell 6 to 7 mpg below stated ratings.

Ultimately, that means that -- in this case, anyway -- Ford may be held to a lower standard of accuracy than Hyundai and Kia were. (Of the 13 Hyundai/Kia models cited by the EPA, most relied solely on gasoline.) For example, Ford might be required to amend window stickers on the C-Max and Fusion Hybrid so that they more accurately reflect real-world fuel-efficiency. However, there's a good chance that automaker would avoid the kind of fines being considered for Hyundai and Kia.

But that doesn't mean that Ford will walk away with just a slap on the wrist. It would be in the company's best interest to create a reimbursement plan for consumers who've already purchased the C-Max and the Fusion Hybrid -- something along the lines of what Hyundai and Kia are doing for their customers, though Ford's liability wouldn't approach the $100 million per year that its South Korean competitors will be paying.

Nor does it mean that Ford would dodge lawsuits -- potentially, some of the class-action variety. Such litigation could cost Hyundai and Kia $775 million, though again, Ford's liability would likely be far less since (a) it only has two models under investigation; (b) those models are from one model year, not three like Hyundai/Kia; and (c) the EPA has tempered the blow of such suits by easing Ford's culpability with regard to hybrids.

We can draw at least two conclusions from this controversy.

First and foremost, in the Internet Age, automakers must pay increasing attention to detail. Frustrated consumers now have countless blogs, forums, and social media channels through which to find one another. If an owner becomes annoyed with a vehicle's features -- from its fuel economy to its infotainment system to the upholstery in the trunk -- he or she can easily find others with similar complaints. If enough of those pile up, it could spell trouble for the automaker's image, its bottom line, or both.

Second, as hybrids, electric cars, and other advanced-tech vehicles grow in popularity, the auto industry, regulators, and the public need to find new ways of accurately conveying fuel economy. As we've discussed, miles-per-gallon probably won't fit the bill much longer (if it ever did). While the industry transitions over the next several decades from cars powered by fossil fuels to those driven by batteries, it's unlikely that one metric will work for every vehicle. But hopefully we can agree on a combined standard that makes sense to all parties.