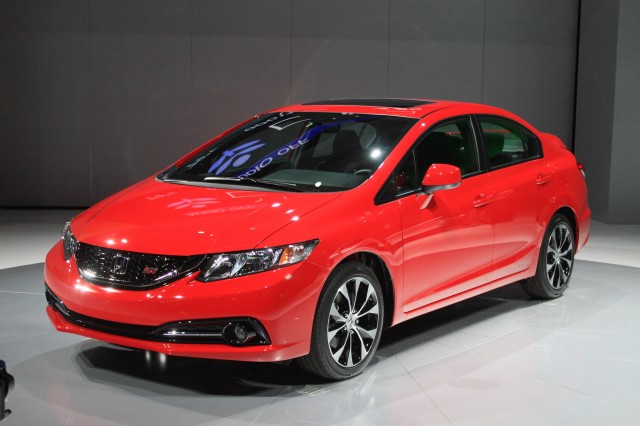 Honda has revealed the refreshed 2013 Civic at the 2012 Los Angeles Auto Show, and it has definitely delivered on the promised upgrades.

While this is a mild refresh, the 2012 Civic does feature new sheet metal on sedan models, including revised front and rear fascias. The actual crash structure in the front has been completely redone which will help it achieve the new IIHS Top Safety Plus score, making it one of the safest compact cars on the market.

While the powertrains haven't changed, Honda revised the suspension tuning to help give the Civic a stiffer, more controlled ride. This should also make for a better-driving car.

Inside the 2013 Civic, Honda has upgraded the technology with standard Bluetooth hands-free calling, audio streaming, text-message functionality, Pandora integration, and a rearview camera system. The navigation system has been upgraded with seven million points of interest, and subscription-free FM traffic.

Of course the largest change with the new Civic models lies in the interior materials. This was the sore point in the Civic when it launched the current generation just a few years ago. Inside, you'll now find soft-touch materials throughout the cabin, along with revised textures and panel cutlines. The trunk now has a finisher and black carpeting. Also new is an all-black interior option.

The new 2013 Honda Civic has been priced from $17,965 and is on sale now. For more information be sure to read our full preview here.