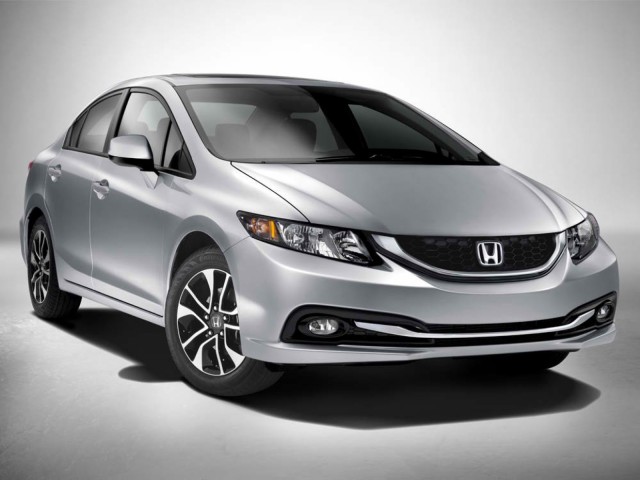 Earlier this month we gave you a first glimpse of a significantly refreshed 2013 Honda Civic. Now at the Los Angeles Auto Show Honda has pulled the wraps entirely off the new Civic just as it begins reaching dealerships—this week—and there are some surprises that, from first glance, should make the new Civic a much more appealing and competitive compact sedan in the market.

Most notably, perhaps, other than the styling changes we already reported on, the new Civic includes a much-improved interior feature set, including Bluetooth hands-free calling connectivity and audio streaming, text-message functionality, Pandora integration, and a rearview camera system—all standard.

Navigation systems have been upgraded, too, with the new-generation system that has up to seven million points of interest and FM traffic, for subscription-free traffic info.

Inside, new soft-touch materials have been applied throughout the cabin, with revised textures and panel cutlines. All models now include a trunklid finisher and black carpeting. Cloth or leather are offered, as well as an all-black interior combination for the first time.

One area of complaint for the 2012 Civic, other than the cabin materials, has been the interior refinement, and Honda has made major gains in this department as well. Its body has been stiffened with more high-strength steel, side pillars have been upgraded, and thicker windshield and front door glass have been applied—as well as more soundproofing for the dash, floor, doors, and rear tray. Handling performance should be up, too, thanks to a retuned suspension aimed at increasing handling linearity. Front brake rotors also get an upgrade in size.

Safety-wise, the Civic gets a new SmartVent airbag design—like what just made its debut in the 2013 Honda Accord—and the Civic Hybrid will get standard Forward Collision Warning (FCW) and Lane Departure Warning (LDW) systems.

Pricing for the 2013 Civic, unveiled today, ranges from $17,965 for the Civic Coupe or $18,165 for the Civic Sedan—including all of those features. Top Si Sedans cost $22,715, while the Civic Hybrid now costs $24,360. The base Civic DX is gone this year, yet for most buyers this positioning should place the Civic at a value advantage over a number of other compact entries.