Is Miles-Per-Gallon Really The Best Measure Of Fuel Economy? 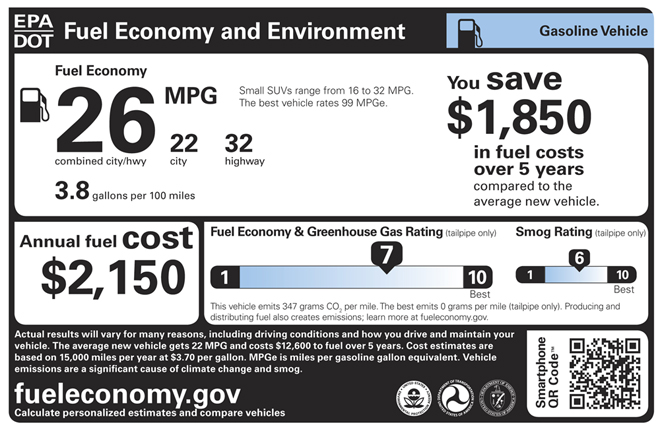 In the U.S., we tend to talk about fuel economy in terms of miles-per-gallon. After decades of doing so, it's a system that we've come to understand -- or so we think.

Unfortunately, miles-per-gallon doesn't tell the whole story. In fact, it's a metric that can sometimes be deceiving. But what are the alternatives?

In many other parts of the world, shoppers evaluate vehicles based not on miles-per-gallon, but on gallons-per-mile -- or more specifically, gallons-per-100-miles (or 100 kilometers). A few years ago, folks at Duke University's Fuqua School of Business showed that, even though Americans aren't used to thinking in such terms, the gallons-per-100-miles is a more accurate, useful metric.

The Duke team asked consumers to evaluate which is the more fuel-efficient combination for a two-car family:

Expressed in miles-per-gallon, it looks as if the answer should be "B", but that would be wrong. If this hypothetical family drives 100 miles in each vehicle per week, the "B" combo would consume 12 gallons of gas, while "A" would use just 10.

The math involved isn't complex. Say your current car gets 25 mpg. Think back to the mists of Algebra 101, and you might recall that 25 miles-per-gallon can be expressed as 25/1.

Things get especially interesting when you use this method to evaluate fuel savings on new cars. For example, what if you're planning to ditch the aforementioned 25 mpg vehicle for a new one, and the two cars on your short list earn 35 mpg and 50 mpg? The difference seems huge, but do a little math, and you'll realize that the former uses 2.8 gallons/100 miles, while the latter comes in only slightly better, at 2 gallons/100 miles.

Our own John Voelcker made a similar argument last year at TCC's sister site, Green Car Reports. The big takeaway? Looks can be deceiving.

The other side of the coin

In Ford's new marketing campaign for the Fusion Hybrid, for example, Ford says the car "doubles the fuel economy of the average vehicle". Focusing on generalities rather than quantifiable data isn't a bad idea -- especially since the Fusion seems to being having trouble meeting its stated fuel economy figures.

Part of Ford's nervousness about numbers has to do with proving those numbers under real-world conditions. But Farley's comments also raise a larger question about accuracy.

Specifically, as hybrids and electric vehicles make up a greater part of the auto market, how do we reach a common metric of fuel efficiency -- or, more to the point, can we? Is it fair to use the same yardstick for the extended-range Chevrolet Volt and the conventional Chevrolet Camaro -- much less the all-electric Nissan Leaf? Are these cases of apples and oranges, or can we establish some way to explain the differences between vehicles that use a range of fuel technologies?

For example, would it make more sense to alert customers to a vehicle's annual fuel costs and the savings it offers (or fails to offer) compared to average vehicles? Given the volatility of the fuel/energy markets, would that be an accurate metric? Or should we give customers every possible means of evaluation -- miles-per-gallon, gallons-per-100-miles, annual fuel cost, and annual savings -- as we're seeing on the new, EPA-approved window stickers for 2013 models?

We don't have the answers to these questions, but we'll keep you posted as others propose solutions of their own.