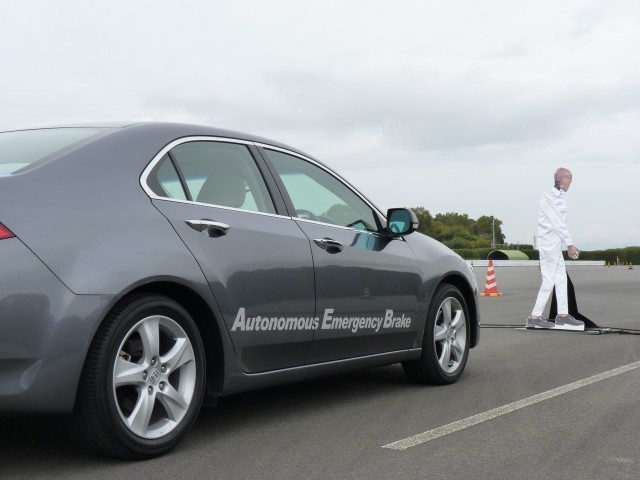 One of these interim steps is Honda's Autonomous Emergency Braking system (AEB), which identifies pedestrians ahead—whether stationary, or walking—and can apply the brakes at up to 80 percent of maximum capacity.

AEB uses the combination of a high-resolution camera and a laser-radar system to recognize hazards ahead (pedestrians, objects, or other vehicles) and discern the target's speed, signaling to the driver and then engaging the brakes.

The system could make a significant difference in pedestrian fatalities and injuries. In studying collision data from the Institute for Traffic Accident Research and Data Analysis (ITARDA), Honda found that 74 percent of vehicle-to-person collisions were to pedestrians that were crossing the street, so the system has a special focus on identifying that situation.

Focusing in on pedestrians

The system can accomplish a full stop from up to 60 km/h (37 mph). And once it's potentially deployed, beginning as soon as two years from now, it could see wide installation in smaller city-friendly models, as it uses a relatively economical laser system, plus a processor system that interfaces with the existing stability control system.

In a test of AEB, we were asked to maintain a constant 50 km/h (31 mph); as we approached a human-sized cutout, the system beeped and flashed an instrument-panel warning, then without our applying any brake pressure brakes us strongly to a stop, at least five or six feet short of the 'pedestrian'—more of a buffer than we've noted from Volvo's Pedestrian Detection with Full Auto Brake feature. A second run, with the pedestrian pushed into the path of the vehicle, yielded similar results.

Separately, to help reduce accidents at higher speeds, with other vehicles, Honda is also working on an enhanced version of its adaptive cruise control system. Called i-ACC, this new system aims to prevent the rapid braking and acceleration that occurs with adaptive cruise control when another vehicle changes lanes into the lane just ahead of the vehicle, or ahead of its path.

The i-ACC system, which is more likely to be installed in larger, luxury-brand vehicles first, uses a more expensive millimeter-wave radar system that gives longer-range detection ability—combined with advanced processing—to track the location of up to six vehicles.

All about predictive, smooth pre-emptive action

A fast processor, applying predictive algorithms based on real-world traffic observation, allows i-ACC to anticipate what adjacent vehicles might do next and will preemptively make slight changes to vehicle speed to accommodate those possibilities.

With driving styles quite different between Japan, the U.S., Europe, and other markets, the system would likely get a different set of calibration and predictive data depending on the market in which the vehicle is sold. The system represents extensive traffic-modeling work between Honda researchers and engineers in Japan and Germany.

While Honda didn't yet have a running demonstration of i-ACC ready, such a system would reduce the chances of rear-end accidents, pile-ups, and other kinds of high-speed accidents—and combined with AEB in some future vehicles would go a long way toward that zero-collisions goal.

Expect both technologies to begin arriving in Honda and Acura models in about two years.