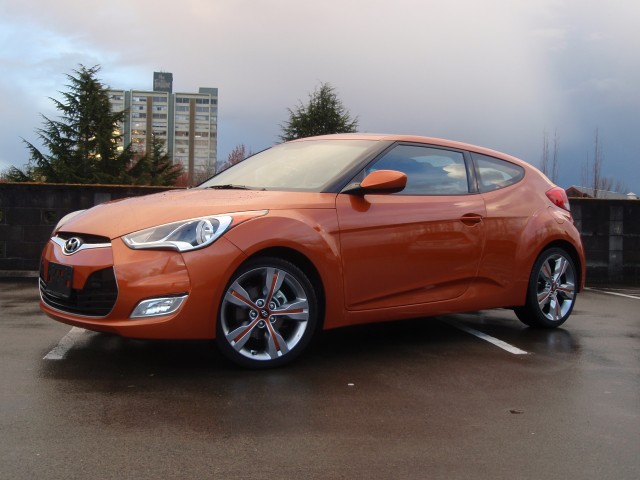 Today we've turned in the keyfob to our Six-Month Road Test 2012 Hyundai Veloster, and we're taking one more look back at something that's likely a priority for every shopper considering the Veloster: gas mileage.

Through six months, we've appreciated its full-featured infotainment system, its styling, its maneuverability, its nimble, eager feel around town, and its child- or dog-friendly versatility. And it's likely that expense-talliers at our corporate offices in Palo Alto have appreciated its fuel-efficiency.

Over about 8,300 miles, we averaged 30.6 miles per gallon in our Veloster, in a mix of driving that we'd estimate to be about three-quarters on the highway.

I'd have liked to say that social media manager Joel Feder and I had put about equal miles on this car, but the truth is that with a more densely packed air-travel calendar (at least over the summer months when this car was with us), I covered only about 1,500 miles of the car's total miles with us.

I drove the Veloster more at first, and when it neared the 1,500-mile mark I took it on a very careful 'economy loop'—with a combination of low-speed city stop-and-go, suburban boulevards, and 55-65-mph expressway driving—and averaged an excellent 41.4 mpg. In short then, we summed that the Veloster is a 40-mpg highway car in real-world driving if (and only if) you have a lot of restraint and can somehow restrict your driving only to the 55-60-mph range.

What we did note, repeatedly, through the Veloster's entire stay with us, was that this is a car that for whatever reason—aerodynamics, gearing, engine efficiency range, or a combination of all these reasons—is not a particularly fuel-efficient car at the 65-75-mph open highway speeds most Americans drive.

Mileage plummets with speed, and whenever we would have the discipline (or the necessity) to limit highway speeds to the 55-60-mph range, average mileage would rise toward the upper 30s. But as soon as cruising speeds were much over 70 mph, 35-mpg tank averages seemed like about the top end.

Then Joel took off in the Veloster, relocating to the upper Midwest for a few weeks. And when he encountered more 75-mph speed limits crossing states like Montana, numbers (whether looking at the tank average or the cumulative one) sank into the low 30s.

We never used an entire tank of gas for city driving; but when we did fill up and watch the trip computer, we seldom saw our average fall below the 26-mpg mark around town; and we think that's good, considering there were a lot of cold starts and short trips. Most of the time we saw figures in the 28-30-mpg range as we did errands around the Portland area—whether near my more urban neighborhood or Joel's more suburban area.

Joel saw a low tank average of 25 mpg in a combination of city driving plus some high-speed commuting, in Minnesota. I saw our best tank average, at more than 37 mpg, predictably on a tank spent during the heavily patrolled Memorial Day weekend, over 55-mph two-laners and slow-but-steady traffic-clogged Interstate.

By the time Joel brought the Veloster back to Portland it had passed 7,000 miles on the odometer. My first time in the car since then, I noted that it was not only returning slightly higher mileage on the trip computer but it also felt a little more sprightly, with the dual-clutch automatic doing a better job than before in reading my right foot.

Incidentally, this past week, as we made plans to turn the car back in, and as we started to look at the numbers on our fuel log, Hyundai Motor America and Kia Motors America announced that after discussions with the U.S. Environmental Protection Agency (EPA) they're voluntarily adjusting the EPA fuel economy ratings downward for about 900,000 2011-2013 model year vehicles.

Those include our 2012 Veloster which, with the dual-clutch (DCT) gearbox, came rated at 29 mpg city, 38 mpg highway (32 combined) on the window sticker. Last week's adjustments make its ratings instead 27 mpg city, 35 highway (30 combined).

Considering both that our habits probably include a heavier right foot than your typical driver, and that our 30.6-mpg average weighed heavier than typical on highway driving, we think that the new adjusted figures are very close to what you're going to see in real-world driving.