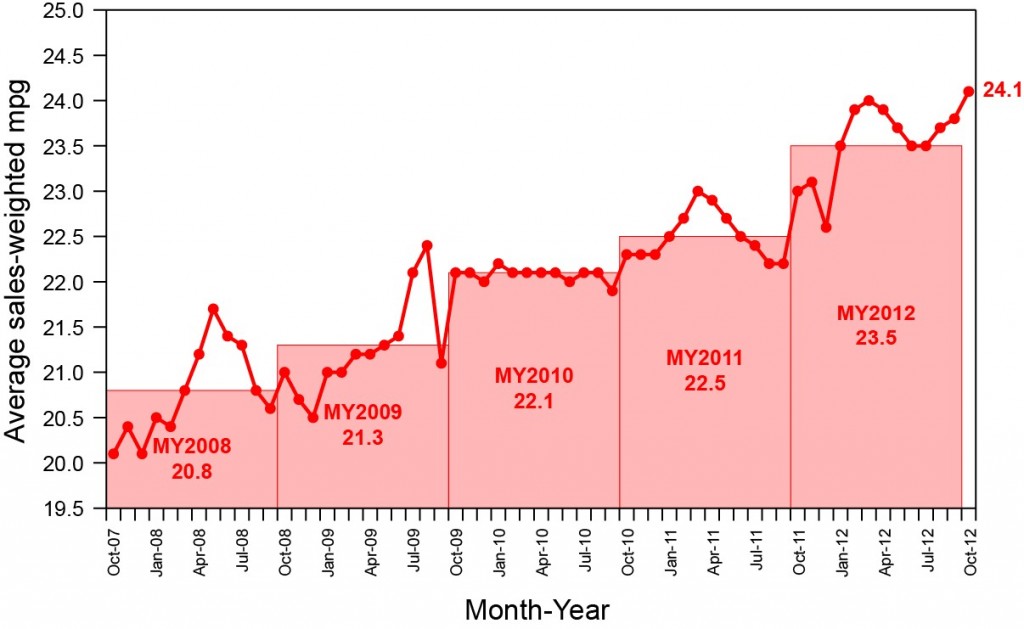 The U.S. auto market has hit another record: the average fuel economy of new cars sold in October reached an all-time high of 24.1 mpg.

(We thought we'd reached that milestone in March, but the number was subsequently revised down to 24.0 -- perhaps in part because of the recent Hyundai/Kia mileage fiasco.)

The news comes from the University of Michigan's Transportation Research Institute, which has been tracking fuel economy stats since October 2007. That starting point is significant, coming just before then-President George W. Bush signed the Energy Independence and Security Act, which established a national fuel economy goal of 35 mpg by the year 2020. (Though we should point out that Bush's 35 mpg goal was based on CAFE ratings, which are higher than the EPA's window-sticker rating.)

UMTRI calculates its data based on vehicle sales, mated to window-sticker fuel economy, which is verified by the EPA based on real-world driving conditions. In October 2007, UMTRI found that the average fuel economy of new cars sold was 20.1 mpg. So over five years, we've seen fuel economy tick up four miles per gallon.

That gain is due, in part, to automakers and their increasingly fuel-efficient lineups. However, as you'll note from UMTRI's chart above, gas prices also have a huge impact on sales. For example, when the U.S. was en route to its highest-ever average gas prices -- $4.11 for a gallon of regular unleaded, recorded on July 17, 2008 -- sales of fuel-efficient vehicles spiked.

This year, we saw a similar trend: fuel-efficient vehicles were big news in the spring, as nationwide prices flirted with the $4-per-gallon mark, then lost luster as prices relented. When gas prices ticked up again after Hurricane Isaac, fuel economy rose once more.

But now, despite the devastation wrought last week by Hurricane Sandy, gas prices are on their way down. In fact, they've just posted their biggest drop in four years. As a result, interest in fuel-sipping rides may slide over the next few months.

Are you in the market for a new car? How big of a concern is fuel economy? Some studies suggest that it's your #1 criteria, others say the opposite. Share your own thoughts in the comments below.