Zipcar Lets Voters 'Zip To The Polls' For Half Price 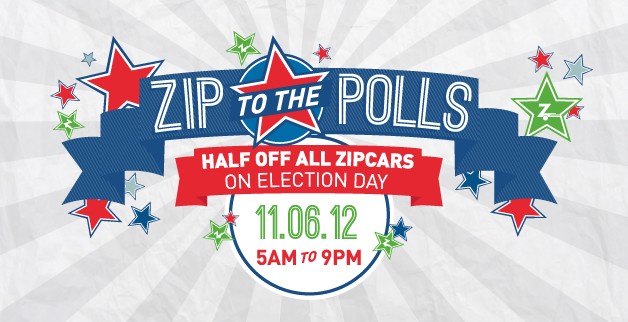 Zipcar's 'Zip to the Polls' promo for the 2012 election

In America, many voters are focused on tonight's presidential debate at Hofstra University. But some are already thinking ahead to November 6 and wondering, "How the heck am I going to get to the polls?" Zipcar could be the answer they're looking for.

Zipcar has announced a one-day program called "Zip to the Polls", which will offer discounted rentals on election day. A press release from the company states that "hourly rates will be reduced by half on all Zipcars nationwide between the polling hours of 5am and 9pm (local time) on November 6, 2012."

According to Zipcar CEO Scott Griffith, "Zip to the Polls" is all about meeting the needs of its target market: "We know a lot of our members are actively engaged in civic affairs and passionate about issues, but also lead busy and active lifestyles. We want to make it as easy as possible for our members to cast a ballot in this year's election by providing the flexibility to get to the polls whenever is most convenient, whether that's in the morning, at lunch, during the workday or the evening."

Not surprisingly, most Zipcar members are on the young side. In fact, 60% fall into the Millennial demographic of 18-to-34-year-olds.

That demographic typically leans heavily Democratic, so if a sizable number of Zipcar's hundreds of thousands of U.S. members take advantage of "Zip to the Polls", it could give an edge to President Obama and his colleagues on the left.

Of course, Zipcar doesn't require its members to show proof that they voted in order to get the cut rate. So in theory, you could just plan a big ol' trip to Ikea on election day and still get the half-price deal. But you wouldn't do that, would you?

For more details about "Zip to the Polls", visit the Zipcar website. And if you haven't yet registered to vote, you may still have time: visit Zipcar's Facebook page to get the ball rolling.