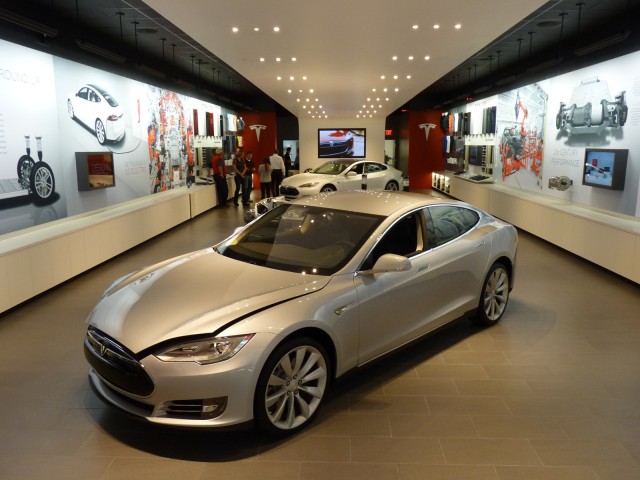 Given today's high gas prices, many car shoppers are turning their attention to hybrids and other fuel-efficient vehicles. Electric cars like those built by Tesla [NASDQ:TSLA] could be attractive to better-off buyers, but Tesla is facing some legal problems that may slow the selling process.

Automotive News reports that dealer networks and government regulators across the U.S. have begun to question Tesla's sales techniques. And in several cases, they've threatened legal action to stop the start-up.

A new paradigm for auto sales

According to the National Automobile Dealers Association, 48 states have franchise laws that forbid or restrict the ability of automakers to sell vehicles directly to the public. That's why dealerships tend to be independently owned and operated. Tesla showrooms, on the other hand, are owned by Tesla itself.

However, Tesla says that the majority of its showrooms -- designed by George Blankenship, the man behind Apple's outrageously successful chain of retail shops -- don't actually conduct sales; they simply share information about Tesla vehicles. When it's time to seal the deal, Tesla staff point prospective shoppers to the automaker's website, where they can customize and reserve their vehicle

Other dealers aren't buying it. They insist that even though Tesla's showroom staff don't technically sell vehicles on site, they do everything else that a traditional dealership would do. In short, they argue that by facilitating the sales process, Tesla showrooms are essentially conducting sales.

To date, questions about the legality of Tesla showrooms have arisen in four states: Illinois, Massachusetts, New York, and Oregon. Because franchise laws vary from state to state, each case is a bit different: some complaints have been brought by dealer associations, and in Illinois, the challenge was lodged by the Secretary of State. Tesla says that it is doing everything it can to comply with each state's regulations.

Tesla currently maintains 17 showrooms in 10 states and the District of Columbia, but it's set to open another six this fall. As Tesla expands operations and its reputation grows, we'd expect to see many, many more challenges to its business model down the line.

Will Tesla eventually shift to a conventional model of independently owned dealerships? Or will it bring about a change in the way that state laws are written -- laws generally written decades ago, when there was far less competition in the marketplace and states wanted to put big automakers on more equal footing with smaller ones?

And more importantly, will Tesla's unusual sales paradigm -- which has recently been copied, in part, by Audi -- change the way that automakers interact with customers?