NHTSA: Traffic Fatalities Up 9% In The First Half Of 2012 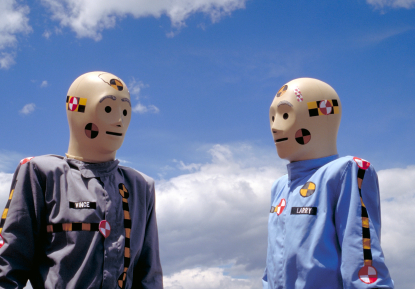 Vince and Larry, the crash-test dummies

Yesterday, we mentioned that New York City saw a rise in traffic fatalities during the fiscal year that ended June 30, 2012. That's the city's first increase since 2007, and -- more worrying -- we noted that it might be a harbinger of a national trend, since preliminary data from the National Highway Traffic Safety Administration showed a 13.5% increase in traffic fatalities across the U.S. in the first quarter of 2012.

Well, we have good news and bad news.

The good news is that NHTSA has released additional figures on traffic fatalities for 2012. While the numbers are still "unofficial", it appears that the 13.5% rise in traffic fatalities seen in the first three months of the year didn't carry through the following three.

The bad news? NHTSA still predicts an increase in traffic fatalities for the first half of 2012 -- an increase of 9%, in fact.

The last time the U.S. saw such a dramatic rise in traffic fatalities was back in 1979, and even then, it only ticked up 6.4%.

No one is sure what's behind the increase, but Lon Anderson at AAA suggests that it might have something to do with America's gradually improving economy. As business slowly returns to normal in the U.S., more cars and trucks are on the roads, and as traffic increases, it's nearly inevitable that traffic fatalities will, too.

Anderson notes that the poor condition of America's highways and byways might also be to blame.

We would add that distracted driving -- and distracted walking -- is a growing problem for drivers and pedestrians, which could be a contributing factor, too.

While NHTSA's news is disheartening, it's important to note that even if 2012 does bring an increase in traffic fatalities, America's fatality rate should still be comparatively low.

So, while the raw number of traffic-related deaths may increase in 2012, when merged with the high number of miles Americans drive, the fatality rate should stay down. We know that's not the most silvery of linings, but it's the best we can do with this preliminary data.