Connect with our dealer and finance partners through our site and ask for details regarding their at-home car buying services.
OK
HomeNewsSUVs/Wagons 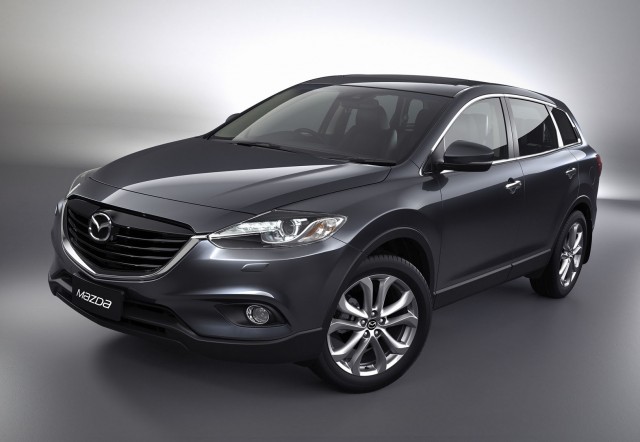 With its CX-9, Mazda proved that spacious family vehicles can actually be exciting to look at, as well as exciting to drive. Now, well ahead of an official introduction in October at the the 2012 Australian International Motor Show in Sydney, it's given us a first look and preview of a significantly refreshed 2013 CX-9 that will offer more aggressive front-end styling, a better interior, and a stronger feature set.

Take a quick look at the new 2014 Mazda CX-9 from the front and you might think it's an all-new version. By adopting Mazda's Kodo 'soul of motion' design theme—as featured in the 2013 Mazda CX-5—the automaker has given the 2013 Mazda CX-9 a new look, at least from the front views it's provided in early photos. Yet it's clear that from the side the profile—as well as details like the wheel-well bulges and door handles—carry over to the new version.

We can't see anything of the interior with the early images Mazda released, but the automaker notes “enhancements in craftsmanship and interior design.” It's likely that the CX-9 will get significant updates to audio and navigation, with a voice-command system available, and several active-safety features--Forward Obstruction Warning System, Lane Departure Warning System, and High Beam Control System—will be offered.

Mazda says that the CX-9 will carry over with Mazda's existing 3.7-liter V-6 'MZI' engine and six-speed automatic transmission.

Expect to see the new CX-9 reach dealerships late this year, as a 2013 model.

Does Mazda's Kodo design philosophy work as well here as it does for the 2014 Mazda6 sedan introduced earlier this summer? Tell us what you think about the CX-9's new look in comments below.