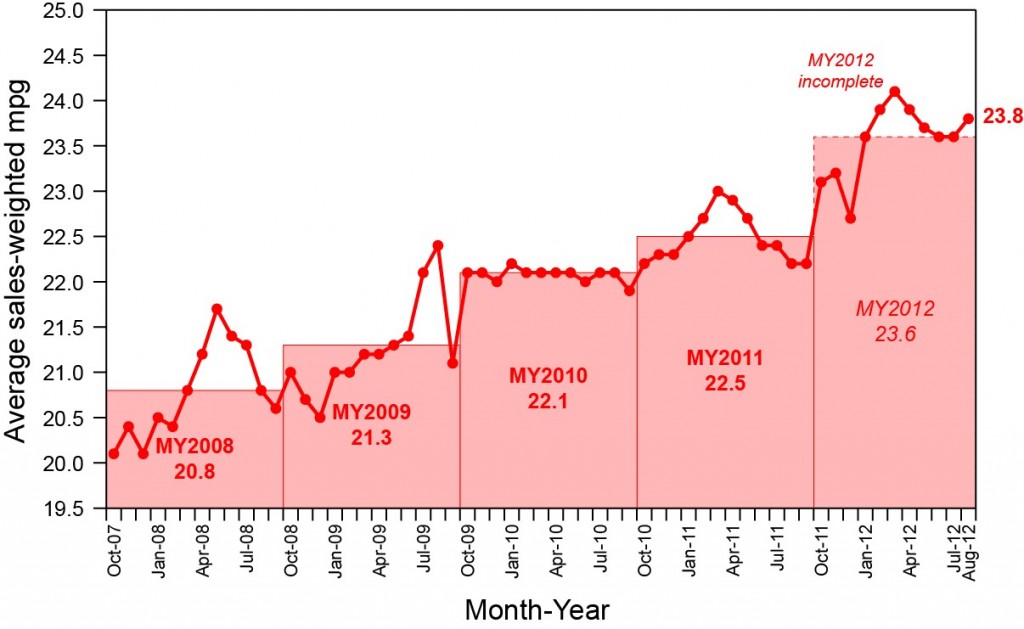 Earlier this year, the average fuel economy of new cars sold in America hit a record high of 24.1 mpg. That was in March, when many analysts though that gas prices were preparing to cross the $5-per-gallon mark.

Then, gas prices relented. Oil values plummeted. The rhetoric around Iran and the Strait of Hormuz ratcheted down. And demand in Europe shrank, leaving America with more fuel on its hands. U.S. pumps returned to prices in the $3.60-per-gallon range, and drivers breathed sighs of relief.

But slowly, over the past few weeks, prices have edged up again. In fact, during the past 30 days, we've gone from an average of $3.65 per gallon to the current $3.82.

Why? Some credit the recovering economy, which has led to increased demand for gas. Others point to summer travel, which has also put a strain on supply. And more than a few nod toward Hurricane Isaac, which shut down oil production in the Gulf of Mexico, sending high-strung speculators into a tizzy.

All we know for sure is that as gas prices have risen, so has the average fuel economy of cars sold in the U.S.

According to the University of Michigan's Transportation Research Institute, average fuel economy hit 23.8 mpg in August, after hovering at 23.6 mpg in June and July. And it's up considerably from the 20.1 mpg that TRI found when it first began tracking fuel economy in October 2007.

Those differences may not look dramatic, but the correlation seems clear and sensible: average fuel economy rises and falls in direct relation to fuel prices. That doesn't mean that there aren't gas-guzzlers sitting on dealers' lots, but they're not moving nearly as quickly as their fuel-efficient cousins.

What does it mean for you, the auto shopper? Most importantly, you can expect to pay a premium for fuel-efficient rides. For new cars, this generally means that dealers are handing out fewer incentives for vehicles like the Toyota Prius. For used cars, it means that gas-sippers depreciate more slowly, narrowing the gap between new- and used-car prices.

Are you shopping for a car? And if so, is fuel economy your top criteria, as it seems to be for most Americans? Drop us a line, or leave a note in the comments below.