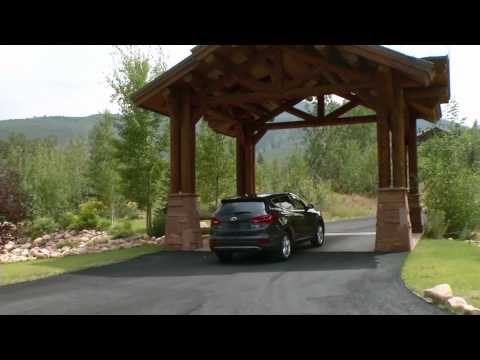 If you're looking around with a puzzled expression, missing the Hyundai Veracruz crossover something fierce, you're not alone. But you are very, very close to it. The Veracruz made so few friends in its brief stay on the U.S. market, it probably pleased fewer shoppers than it irked--like those folks who went looking for the popular Santa Fe crossover on the dealer lot, and found a Veracruz parked in front of it. That's just rude, isn't it?

Well, the Veracruz is no more. It's being replaced, not by one new Hyundai Santa Fe, but really, by two.

With its new double-duty Santa Fe, Hyundai's having it both ways--even a third way, in that it can now bundle all the brand equity and sales numbers of two models under one name. There's the Santa Fe, effectively the Veracruz replacement, coming from South Korea in January, powered only by a V-6 engine--and then there's the proper Santa Fe replacement, the Santa Fe Sport, dropping now with a choice of normally aspirated or turbocharged four-cylinders only, built in Georgia by Kia, with two rows of seats. Period.

Got it? Good, because for now, we're talking only about the Santa Fe Sport, which we drove last week in Park City, Utah, after a shoosh down the polished trough of doom, the Alpine slide, at the former 2002 Winter Olympics venue nearby. Hurtling downhill without a seatbelt, it was easy to see the metaphor for the entire crossover market--careening from one choice to the other--once we got over the mildly nauseating effect of trying to aim a GoPro Hero2 over our shoe tips.

The Santa Fe Sport arrives at a good point in time for Hyundai, as it's closing out a round of seven new or refreshed products in 24 months. It's the first Hyundai to tone down the emphatic "fluidic sculpture" design theme into something less hallmark-y and something more durable--and it's the first vehicle, says CEO John Krafcik, to put a much stronger emphasis on noise damping, material quality, and refinement, now that all its other vehicles have nailed the competitive heights of packaging, fuel economy, and safety.

The Santa Fe Sport also hits as some of its primary targets--Edge, Sorento, Venza, Journey--are well past their newness, or even their mid-cycle refreshes.

There's been more change to the Santa Fe than the powertrains and the styling, and the boost in premium feel. The Santa Fe's now assembled by Hyundai's corporate cousins at Kia, at their assembly plant in Georgia. For now, Krafcik says, his company's happy with that adjustment and with incremental increases in production, to be able to grow at a healthy pace in the U.S. Hyundai has grown sales by 100,000 units in each of the past couple of years and is within reach of 700,000 U.S. sales this year; he doesn't answer directly if that's possible this year, given tight production constraints in the U.S. and in South Korea, but points to new additions like the three-row Santa Fe as well as the European-sourced Elantra GT hatchback as ways that Hyundai can push toward its next major sales hurdle of 800,000 sales annually.

The Santa Fe Sport will do its part. It's more efficient by far than the crossover it replaces, with a peak gas-mileage rating of 33 mpg. It's also more powerful, and its ride is probably its most improved dynamic quality, a result of tuning shared with the longer-wheelbase Santa Fe. It's likely that the only real battle the Sport will have to face will be constant comparison with vehicles in a smaller size class--vehicles like the new Ford Escape and the Honda CR-V, both of which are priced as close to the Santa Fe Sport as Hyundai's named competition.

There's more on the $25,000 Santa Fe Sport, in just about every media imaginable. For everything we know about the two-row crossover--and a little something about the three-row on its way--watch our video road test, see our full review of the 2013 Hyundai Santa Fe, and follow us on Facebook and Twitter.