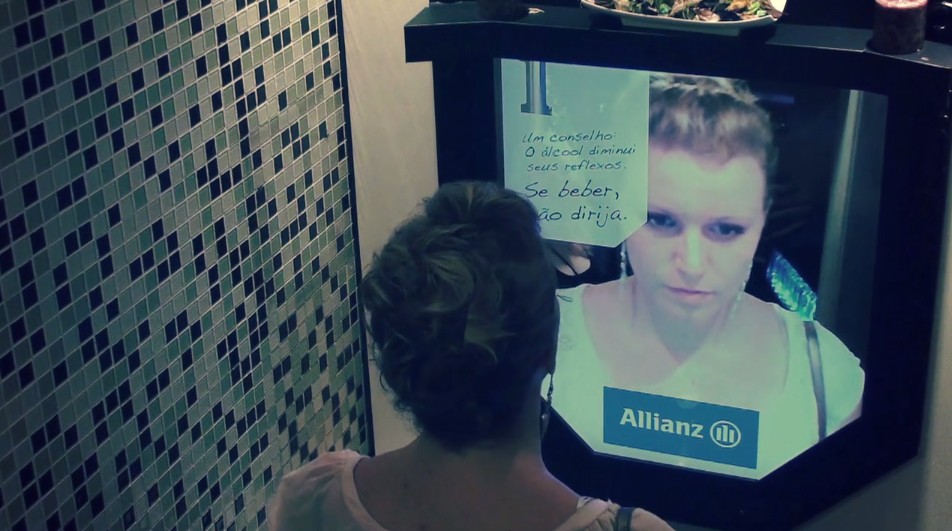 The 'Drunk Mirror' drunk-driving campaign by Ogilvy for Allianz

Fixing the problem of drinking and driving isn't easy. Though alcohol-related traffic fatalities are on the decline in the U.S., there were still 10,228 such deaths on our roads in 2010, which is 10,228 too many.

Efforts by law enforcement can go only so far in addressing the matter. To really reduce drunk driving, enforcement has to be paired with education of the driving public.

But that raises the question: how do you effectively educate the driving public? Sure, it's easy to convince grade-schoolers that drinking and driving is bad. But what about party-loving 20-somethings, most of whom are out on their own for the first time in their lives?

Not so long ago, Brazil passed a zero-tolerance policy on drunk driving. Since then, Ogilvy has staged numerous campaigns to reduce the number of impaired drivers on the roads -- including issuing outrageously inflated bar tabs and employing "drunk" valets.

The agency's newest campaign is a bit more high tech, employing a digital mirror -- basically, a video camera that projects reversed images onto a monitor disguised as a mirror. The catch is, the video is delayed by about a second, which creates a disconcerting lag for those looking into it.

As you'll see in the video clip below, patrons have a good time interacting with the mirror for a bit, enjoying what they think is a tech-driven glitch. But then, the system slaps up some informative notes that reveal the point of the campaign -- notes like, "This is how slow your reflexes are after only a few drinks." The customers captured on video seem a little befuddled, then concerned. Some put down their drinks immediately. Take a look:

So, what do you think? Does it seem effective? Would such a campaign work here in the U.S.? Drop us a line, or leave a note in the comments below.